With more than 100,000 people in the hospital with Covid-19 in the US, this August is worse than last, expert says

(CNN)More than 100,000 people are hospitalized with Covid-19 in the US — the first time that level has been reached since January — as medical workers say they’re once again struggling to treat waves of patients.

The latest figure, amid a summer surge in Covid-19 cases driven by the highly transmissible Delta variant, is also more than double what it was on the same day last year, when vaccines were not available as they are now.
Hospitals and researchers have been saying the vast majority of this year’s hospitalized patients are unvaccinated. The availability of vaccines makes the current hospitalization surge tragic, Dr. Paul Offit, a member of the US Food and Drug Administration’s vaccine advisory committee, told CNN Wednesday.
“The numbers now … are actually in many ways worse than last August,” Offit said. “Last August, we had a fully susceptible population, (and) we didn’t have a vaccine. Now, we have half the country vaccinated … but nonetheless the numbers are worse.
“The Delta variant is one big game changer,” he said.
Covid-19 hospitalizations and cases have soared since late June as the Delta variant gained dominance in the US.
More than 100,317 Covid-19 patients were in US hospitals Wednesday — more than six times higher than the figure was roughly nine weeks ago, according to the US Department of Health and Human Services.
The only other period that figure was above 100,000 was from late November to early January, when the country saw a major surge in cases.
Fully vaccinated people are far less likely than unvaccinated people to be hospitalized with Covid-19, a recent study from Los Angeles County affirmed.
Infection and hospitalization rates among unvaccinated people were 4.9 and 29.2 times, respectively, those in fully vaccinated persons on July 25, researchers from the Los Angeles County Department of Public Health wrote in the study, which was published this week by the US Centers for Disease Control and Prevention.
Very few fully vaccinated people with coronavirus infection went to a hospital: 3.2%, of them were hospitalized, 0.5% were admitted to an intensive care unit and 0.2% required mechanical ventilation, the researchers said.
The study included data on coronavirus infections that occurred in Los Angeles County from May 1 through July 25. The data, which involved both vaccinated and unvaccinated people, included only laboratory-confirmed cases of infection and were representative of infections in the county alone, not the entire United States.
“The findings in this report are similar to those from recent studies indicating that Covid-19 vaccination protects against severe Covid-19 in areas with increasing prevalence of the SARS-CoV-2 Delta variant,” the researchers wrote.
The country has averaged more than 152,400 new Covid-19 cases a day over the past week — more than 13 times what the figure was about nine weeks ago, according to data from Johns Hopkins University.

With 48.3% of the US still not fully vaccinated, hospitals are straining to keep up with incoming patients as cases rise.
Florida has been hit particularly hard, with the worst per capita Covid-19 hospitalization rate in the country — about 80 per 100,000 people. That’s followed by Alabama, Mississippi, Georgia and Louisiana, each with more than 55 hospitalizations per 100,000 people, according to HHS data.
“I had to turn away a cancer patient that needed an emergency treatment,” Florida oncologist Dr. Nitesh Paryani told CNN. “For the first time in 60 years of my family’s history of treating cancer, we had to turn someone away … We just didn’t have a bed. There was simply no room in the hospital to treat the patient.”
Paryani said his Tampa emergency room recently had a 12-hour wait.
In New Mexico, the acting secretary of health, Dr. David Scrase, said if nothing changes, the state is on track to reach crisis standards of care within the next week to accommodate the continued rise in cases.
Covid-19 intensive care hospitalizations have risen so quickly, officials are having trouble creating accurate charts to illustrate it, Scrase said.
“Because we’re at over 100% capacity, these beds are filled before we get time to make the map,” he said. 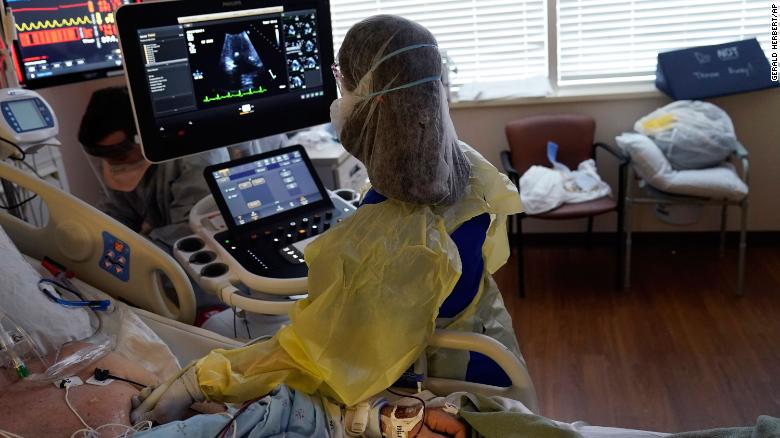 Tracy Brooks, an echocardiogram technician, takes readings from a critically ill Covid-19 patient in an intensive care unit at the Willis-Knighton Medical Center in Shreveport, Louisiana.

Some leaders change tactics, others double down

As cases have surged across much of the country, some leaders have implemented measures to mitigate spread, while others have pushed back on those types of moves.
In Illinois, Gov. J.B. Pritzker announced Thursday that all public school teachers and staff, all higher-education personnel and students, and health care workers in a variety of settings must be vaccinated against Covid-19 by September 5 or face regular testing requirements.
Illinois is also instituting a statewide indoor mask requirement, regardless of vaccination status, beginning Monday, he said.
Pritzker said the requirements are aimed at protecting the most vulnerable residents — children ineligible to be vaccinated and elderly people with weakened immune systems — as well as hospitals with limited staffing and space.
“My number one concern is right now keeping the health care system available, not just for people who may get Covid but for people who have other problems and are taken to the hospital,” he said.
On Maui, in Hawaii, Mayor Michael Victorino asked residents and visitors to respond to soaring cases and hospitalizations there by avoiding unnecessary activities for at least three weeks. Victorino is also asking Gov. David Ige for approval of new mandatory restrictions on gathering sizes.
“This is not rocket science, everyone. It’s real simple,” Victorino said Tuesday. “We’ve got to step it up again.”
Meanwhile, the governors of Texas and Florida have doubled down on their stances against mandates for vaccination and masks.
Texas Gov. Greg Abbott issued an executive order Wednesday extending the current policy prohibiting vaccination mandates by “any government entity” throughout the state, according to a statement from his office.
And Florida Gov. Ron DeSantis, who previously issued an executive order banning mask mandates in schools, reiterated Wednesday that school districts imposing mask mandates “are violating state law.”
“We think the parents are best situated to make that decision and if these entities are going to violate state law … there’s consequences for that,” DeSantis said, responding to questions from reporters.

With no vaccines available to children under 12 and school starting up across the country, experts are concerned about the growing number of infections among children.
Texas Children’s Hospital is seeing an unprecedented surge of pediatric coronavirus cases, with a record number of kids being hospitalized for the virus and children are showing up sicker than before, Dr. Jim Versalovic, interim pediatrician in chief at the Houston-based hospital system told CNN.
“We have reached new records in the Delta surge,” Versalovic said Wednesday. “We had reached a high over 900 cases in one week, in early January of 2021. That was our winter surge peak. We have now exceeded 1,300 cases in one week.”
Earlier this year and last year, many children who tested positive for coronavirus had mild symptoms or no symptoms at all, he said.
“What we’re seeing now are more symptomatic children and children with very prominent fever, congestion, fatigue and other symptoms,” including a cough, he said. “A greater proportion of children who are infected with the Delta variant are presenting with symptomatic infections, with notable symptomatology,” he added. “We’ve seen more infants and young children presenting with symptomatic infection and hospitalized with Covid-19.”
And in Louisiana, the state department of health said Wednesday that a child under the age of 1 died due to Covid-19, the first death in a child that young in the state in more than six months, Gov. John Bel Edwards said.