(CNN)Opening schools full of unvaccinated children without requiring them to wear masks or take other precautions is a recipe for disaster, the physician-in-chief of Children’s Hospital New Orleans says.

“I think bringing together large numbers of children, congregating them in classrooms with masks being optional — or worse yet even, forbidden — is just a formula for disaster,” Dr. Mark Kline told CNN’s Don Lemon.
Kline cited Louisiana’s mask mandate for schools and said it would be wise for governors across the region to follow suit.
“This virus that we’re dealing with now is a game changer, and it’s just so easily transmitted from person-to-person that this could truly catalyze an explosion of cases across the region,” he added.
It’s not just students who could soon see mandates. Dr. Anthony Fauci, director of the National Institute of Allergy and Infectious Diseases, said on MSNBC on Tuesday that he thinks vaccines for teachers should be mandated.
“We are in a critical situation now,” he said. “We’ve had 615,000-plus deaths and we are in a major surge now as we’re going into the fall, into the school season. This is very serious business. You would wish that people would see why it’s so important to get vaccinated.”
As Americans gear up for a new school year against a backdrop of rising Covid-19 cases, experts say there is no time to waste in getting already rising vaccination rates even higher.
For the first time since mid-June, the US is currently averaging more than half a million people initiating vaccinations a day. At 503,734 new vaccinations, that’s a 13% increase over last week’s pace, according to data published Tuesday by the US Centers for Disease Control and Prevention.
Though the improvements are promising, more Americans still need to get vaccinated as quickly as possible, especially considering that it takes six weeks from the first injection for people to be fully protected, said Dr. Thomas Frieden, a former CDC director.
Just over half of the total population is fully vaccinated, while about 31% of the vaccine-eligible population has not been vaccinated.
The large swath of the population still unvaccinated is even more of a concern as cases rise. With an average of more than 116,600 new Covid-19 cases per day, it’s the highest in about six months, according to data from Johns Hopkins University.
And rates of hospitalizations and deaths have almost doubled in the past two weeks. More than 68,000 people are hospitalized with Covid-19, according to data from the Department of Health and Human Services.
More than 99.99% of people who are fully vaccinated against Covid-19 have not had a breakthrough case resulting in hospitalization or death, according to a CNN analysis of data from the CDC.
But as effective as vaccines are, Frieden said that with rates too low, vaccination may need to be paired with mask mandates.
“What we know really well is that vaccines work and masks work,” he said. “Doubling the protection is particularly important because we have this doubly infectious variant of Delta.

Concerns over the rise in cases are growing for many as parents begin to send their children to school for the new year.
A CNN analysis from August 5 found that at least seven states — Arkansas, Arizona, Iowa, Oklahoma, South Carolina, Texas, and Utah — prohibit districts from requiring masks in schools.
On August 6, an Arkansas judge temporarily blocked the enforcement of the state’s law banning mask mandates in schools, in response to two lawsuits — one from a school district, and one from parents — who want schools to be able to require masks if they so choose. School districts are allowed to enforce mask mandates while the suit continues. 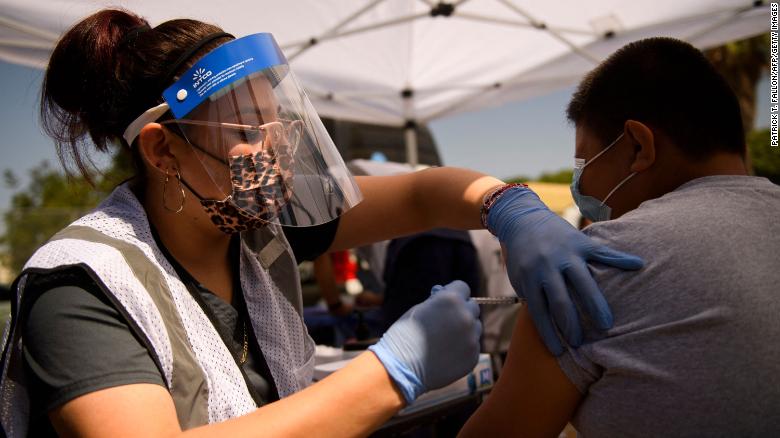 A 12-year-old receives a first dose of the Pfizer Covid-19 vaccine at a mobile vaccination clinic during a back to school event in Los Angeles.
Florida does not technically ban school districts from requiring masks, but Gov. Ron DeSantis has pulled other levers to reach the same point. The governor’s office said in a statement Monday the state board of education “could” move to withhold the salary of the district superintendent or school board members in districts that made masks mandatory in schools.
Leon County Schools Superintendent Rocky Hanna in Florida on Monday announced that his district will start the school year with a temporary mask requirement.
The move “speaks against” what DeSantis and state health officials have said, Hanna said, but if a child was lost to the virus, he couldn’t blame the governor, saying “that’s on me.”
“And if there’s an out and I didn’t take the out, and I didn’t do what was best for the children here in Tallahassee and Leon County, that’s on me,” Hanna said. “Every time I looked at myself in the mirror it would be really hard to answer to that guy.”
Hanna told school officials at a meeting Monday afternoon that “you can’t put a price tag on someone’s life, including my salary,” according to reporting by the Tallahassee Democrat.
Alachua County Superintendent Carlee Simon, whose school district also is defying DeSantis’ attempted ban on mask mandates, said she doesn’t believe he’s taking the surge in cases in northeast Florida seriously.
“The governor should take the conservative step and do everything he can to protect the lives everyone in our community,” Simon told CNN’s Lemon. “I believe the governor has other interests that he’s focusing on,” Simon added.
DeSantis Tuesday defended his ban on school mask mandates saying, for him, “It is about parental choice, not government mandate.”
The governor said “a lot of parents” have come to him and complained that masking is hard on their children in a learning environment.
Schools are scheduled to reopen Tuesday in Florida and Simon says she and other school officials are concerned about the rising positivity rate in the state.
“My goal is to make sure that I provide the high quality education and this is a direction I believe I need to go,” Simon said. “It’s concerning because we need to be able to run schools and we need to make sure that people aren’t testing positive or needing to quarantine.”
One health expert said that vaccine mandates for children 12 to 17 may be necessary as the new school year begins.
Speaking about the rise in pediatric ICU admissions in certain parts of the country, Dr. Peter Hotez, a pediatrician and dean of the National School of Tropical Medicine at Baylor College of Medicine, told CNN’s Wolf Blitzer that “schools are going to be an accelerant” for child infections without universal masking.
“It’s not even going to be enough to have mask mandates in the schools,” he said. “We need all of the adolescents vaccinated, and really we need to move towards vaccine mandates for the 12 to 17-year-olds in the schools.”
Some states only have a quarter of the adolescent population vaccinated, Hotez said, so both mask and an increase in vaccination rates among students will be important to containing in-school spread.
“If we’re going to give our fighting chance to have a successful school year, we’re going to need everyone who is vaccine eligible to get vaccinated and everybody masked,” Hotez said.

Hospitals are filling up

Some states are reporting that intensive care units are full or are nearing capacity.
Arkansas Gov. Asa Hutchinson said on Monday that the state had just eight available ICU beds as it reported its largest single-day increase in hospitalizations.
“I think we’re in worse position, in terms of our ICU beds, than we were in January … largely because of the other health needs that we have that occupy ICU beds,” Hutchinson said at a news briefing Tuesday.
“Everybody has to realize that now’s not a good time to get sick, because space is limited,” the governor said.
Mississippi’s senior health officer, Dr. Thomas Dobbs, on Monday tweeted that the state has no ICU beds at its level 1, 2 and 3 hospitals, and more than 200 patients were waiting in emergency rooms for a hospital room.
In Texas, the Lyndon B. Johnson Hospital in Houston has erected tents as an expansion for patients as its ICU capacity is at 100% with 63% Covid cases, Harris Health spokesperson Bryan McLeod told CNN in an email Monday.
Texas Gov. Greg Abbott sent a letter to the Texas Hospital Association asking hospitals to voluntarily postpone elective medical procedures to increase hospital capacity for coronavirus patients, according to a news release from his office Monday.