More than half of Australia’s population is now ‘living with Covid.’ The rest is still some way off

Victoria is the third state or territory — after New South Wales (NSW) and the Australian Capital Territory (ACT) — to begin living with Covid-19 after reaching its target of a 70% adult double vaccination rate.
The easing of restrictions means that, as of Friday, more than half of Australia’s nearly 26 million population is living with the virus, while authorities in the rest of the country push to raise vaccination rates while controlling borders to keep it out.
The division has created a two-speed path out of the pandemic led by states that have suffered the greatest toll, frustrating the federal government’s efforts to reopen the entire country to foreign arrivals for the first time in almost two years.
“We need to move in a pace the Australian public feel very comfortable with, we need to demonstrate that opening up those borders is being done safely, and they can feel confident, because I want us to open confidently,” Prime Minister Scott Morrison said Friday.
Victoria’s 6.7 million residents can now leave their homes for any reason, though they’ll need to show proof of full vaccination to enter public venues. Restaurants can cater for limited numbers of diners indoors, students are back in schools, and there’s no longer a 9 p.m. curfew in Melbourne.
However, stores selling non-essential goods won’t open until 80% of the state is double vaccinated and masks are required inside and out.
Still, the end of the lockdown is a huge relief for Melbourne residents who have spent more than 260 days confined to their homes, forbidden to leave except to buy groceries or other essential items, mostly in two long stretches from July to October, 2020 and August to October this year.
The latest lockdown was sparked by an outbreak of the highly-contagious Covid-19 Delta variant. Even as doors opened on Friday, the state recorded 2,189 new cases — and when people start moving around, it’s expected those daily case numbers will continue to rise. 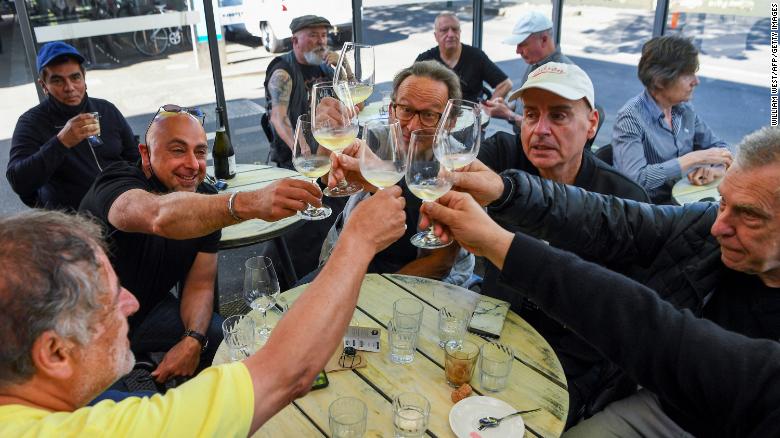 People enjoy a drink at a busy Lygon Street cafe in Melbourne on October 22, following the midnight lifting of coronavirus restrictions in one of the world’s most locked-down cities.

The lengthy lockdowns were part of Australia’s attempts to reduce the country’s Covid-19 infections to zero, a strategy which was largely successful until the outbreaks of the Delta variant. As of Thursday, Australia had recorded nearly 152,000 Covid-19 cases and 1,590 deaths.
But the beginning of Victoria’s reopening highlights a stark divide in Australia. While more than half of the country is highly vaccinated and living with the virus, the other 11 million people are living in states with lower vaccination rates that are largely free of Covid-19.
It isn’t clear how long the two Australias can live easily alongside each other. Part of the problem is that, outside of hotspots, there’s been little urgency for residents to get the vaccine.

At present, the vaccination rates for Covid-affected southeastern states are far higher than those for the rest of the country. For example, more than 95% of people in the ACT have had their first dose, but that figure falls to 57% in Covid-free Western Australia.
At the current pace of vaccinations, Western Australia and other largely Covid-free states are not expected to hit their 80% double dose targets for weeks.
In the meantime, they remain on guard to keep the virus out. In Queensland on Thursday, a rare breach produced the state’s first local positive case in weeks. A man in his 30s who had recently returned from Victoria had spent as many as 10 days while infectious in the community and was so unwell with Covid-19 that he had trouble speaking to contract tracers.
Queensland’s Premier Annastacia Palaszczuk described the infection as a “wake-up call” and warned residents that time was running out to get a dose.
This week, Queensland revealed plans to reopen its borders on December 17 — whether the state has hit its 80% double vaccination target or not. The Western Australian government said on Tuesday it didn’t plan to reopen its borders to the rest of the country until after Christmas

Transition could be ‘challenging’

Prime Minister Morrison acknowledged on Thursday that some parts of the country had “concerns about Covid,” but he said that was all the more reason to get vaccinated.
“Vaccination gives the confidence to move forward,” he said.
Under the national plan, the country’s borders will reopen when double vaccination rates hit 80%. On Friday, Victoria joined NSW in announcing the resumption of international arrivals from November 1, with no hotel quarantine required for fully vaccinated travelers.
Qantas also brought forward its planned flight departures for some international routes.
So far, all flights depart from Sydney — the first Australian city to start living with Covid on October 11. There, daily cases numbers have been falling. On Thursday, the state recorded 345 new infections — well below the highs of early September.
Restrictions eased further on Monday when NSW reached its target 80% of adults fully vaccinated. Limits on the numbers of people allowed in private homes rose to 20 and for the first time in months, residents could play community sports.
The country is slowing reopening — some parts faster than others, and states are looking to each other — and outside — for guidance.
So far, Singapore is the only other example in the region of a community that’s shifted from a policy of zero Covid to living with the virus. However, the city-state has struggled to strike a balance between relaxing restrictions and preventing the number of new infections from overwhelming hospitals.
On Thursday, Singapore said it would be extending its restrictions after recording 18 deaths in the past 24 hours, the country’s highest number since the start of the pandemic.
Lawrence Wong, co-chair of Singapore’s Covid-19 taskforce, said Wednesday medical staff were “stretched and fatigued.”
“At the current situation, we face considerable risk of the healthcare system being overwhelmed,” he said.
While some Australian health experts have warned the health system is unprepared for a large spike of new Covid-19 infections after reopening, Victorian Premier Daniel Andrews was optimistic.
Andrews said Monday that case numbers were becoming “less and less relevant” due to high vaccination rates among the community, and he acknowledged the shift to living with Covid would be “very challenging.”
“Whenever you’ve got hundreds and perhaps thousands of patients needing care … that does put great strain on our system,” he said.
Source: here