Here’s why schools are on alert over new coronavirus variants

(CNN)As new coronavirus variants pop up around the world, public health experts are looking at one key group of people who might be particularly vulnerable to future outbreaks: School children.

There are no indications that any of the new Covid-19 variants causes more serious disease in children and it remains extremely rare for them to become seriously ill. But outbreaks of the strain of the virus first found in India among British children have sparked some worries about the variant’s spread in schools.
The UK outbreaks are still relatively small, but they serve as a cautionary tale for countries across the world that are returning to in-person education.
Scientists believe some of the new variants of the virus, including the B.1.617.2 variant first identified in India, might be more contagious. That could mean social distancing measures that were strong enough to prevent the spread of the “original” virus may not be sufficient to stop transmission of these new strains.
As more schools reopen and new variants become dominant, outbreaks among younger students may become inevitable. Children are currently excluded from vaccination programs in most of the world. Even in the US, one of the few countries currently vaccinating younger people, children under the age of 12 are not eligible for the shot.
As of Tuesday, the B.1.617.2 variant had been found in 54 countries, according to the World Health Organization. While the variant remains uncommon in the US, its share of cases overall is growing, data from the CDC show. 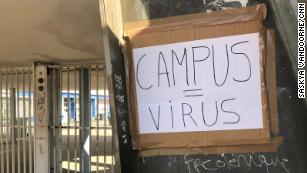 France kept classrooms open ‘at all costs.’ Some say the price was too high
On May 11, the WHO said the United Kingdom had reported the largest number of cases of the strain outside India, although it cautioned that the data may be incomplete, since it depends on countries’ abilities to conduct genetic sequencing.
Public Health England says the proportion of B.1.617.2 cases is growing fast.
Two towns in the north of the country, Bolton and Bradford, have seen major outbreaks of the strain in recent weeks.
Kit Yates, a mathematical biologist and senior lecturer at the University of Bath, said the number of cases among children between the ages of 10 and 14 has never been higher in Bolton.
Yates said the three worst-impacted age groups in the area are all children and teenagers, with most cases recorded in kids between the ages of 10 and 14, followed by those aged 15 to 19 and then those in the five to nine age bracket.
“The rates of infection seem highest among school-age children, where rises were seen earlier, and this now appears to be spreading to older age groups” in areas with B.1.617.2 outbreaks, said Deepti Gurdasani, an epidemiologist and senior lecturer at Queen Mary University in London.
This is not completely unheard of. Gurdasani said a similar pattern was seen in the UK in November and December with the B.1.17 variant, the strain that was first identified in Kent and which became one of the first to be designated a “variant of concern” by health authorities across the world.

Schools could be driving outbreaks

This is not completely unheard of. Gurdasani said a similar pattern was seen in the UK in November and December with the , the strain that was first identified in Kent and which became one of the first to be designated a “variant of concern” by health authorities across the world.
“The variant seems to have spread among children first, and became dominant among children, before gaining dominance in other age groups,” she said.
Gurdasani added that the B.1.17 strain caused disproportionately more infections in children compared to non-B.1.17 variants during the same period of time, which meant the higher number of cases in children couldn’t be explained purely by the fact that schools remained open while a national lockdown was in place in England.
What experts don’t yet know is whether the high number of cases among children means they might be more susceptible to the new variants, or whether there is something about the school environment that makes the new variants spread more easily.
It may be neither. Scientists believe the B.1.617.2 is more contagious overall — not just in schools, but in any place where people come into contact with one another. And as the UK vaccine rollout powers ahead, kids are increasingly becoming the only unvaccinated group. That means the proportion of cases involving children will likely grow.
Schools have been open as normal in the UK since March, with attendance compulsory for all but the most vulnerable students. Meanwhile, many other restrictions remain in place, so schools are among the few places where people are mixing freely. 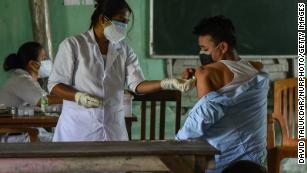 What we know about the Covid-19 variant first found in India
“We did see rises in prevalence [in] school-age children when schools first went back [in March],” Yates said. “This is probably as a result of large numbers of unvaccinated individuals being in close contact with each other indoors for long periods of time,” he added.
The UK is now vaccinating people over the age of 32. Official data from the government show that more than 72% of adults have received at least one dose of the vaccine, with 44% now classed as fully vaccinated.
“You may see a skew in the age distribution of cases; as you get higher levels of vaccination in the elderly, you’re more likely to see younger people getting infected,” said Mike Tildesley, an associate professor at the University of Warwick. “I mean, it’s not going to increase the number in that age group to compensate, but it may be that you see an increased proportion.”
Jason Oke, senior statistician at the Nuffield department of primary care health sciences at the University of Oxford, said outbreaks in schools might continue for some time, because it is unlikely likely the virus will be completely eliminated any time soon.
“I might be pessimistic, but I think there are always going to be little pockets, places where it can spread quickly and it’s difficult to see how we can overcome that, other than taking children out of schools, which I don’t think we really want to do,” he said, adding that while there are children with underlying health conditions who are more at risk from the virus, Covid-19 isn’t dangerous to most children.
The biggest risk stemming from school outbreaks is that children will bring the virus home and spread it to more vulnerable people, but that risk is being eliminated fast with vaccinations.

The UK isn’t the only country seeing new cases among children. Singapore, which has also identified cases of the B.1.617.2 variant, shut nearly all its schools last week after a handful of new cases emerged there. Announcing the closures, the country’s education minster Chan Chun Sing said there were worries about the new strains affecting younger children.
However, the ministry later said on its official Facebook page that there was little evidence children are more prone to catching the new variant.
The UK government doesn’t appear too concerned about the variants spreading in schools — so far, at least. As of last week, the government no longer requires masks to be worn in schools.
Gurdasani said the decision to lift the mask mandate went directly against scientific advice. 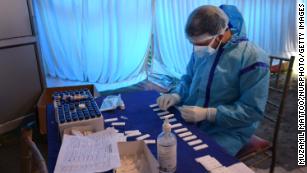 Here’s what’s known about the coronavirus variants
“It’s very concerning that the UK government, which claims to be ‘following the data,’ has completely ignored the data and decided to remove masks from schools against all scientific advice,” Gurdasani said. “We see several school outbreaks and rapid spread among school-age children across parts of England … it’s clear that we need to be strengthening these mitigations, rather than weakening them.”
The government’s decision left many angry. The country’s five biggest labor unions representing teachers and school workers wrote an open letter to schools, telling them to keep masks mandatory, despite the government’s decision. The letter specifically mentioned the spread of the B.1.617.2 variant in schools.
Some experts say it is possible the increase in cases in schools looks dramatic because the UK has significantly expanded its coronavirus testing program, with all children aged 12 and over now tested twice a week — even if they don’t show any symptoms.
“We’ve got really good testing capabilities to detect cases that maybe we missed before, in the younger age groups who perhaps don’t even have any symptoms,” said statistician Oke.
And while there have been significant spikes in infections among children in Bolton and other areas affected by the B.1.617.2 variant, little is known about how serious these cases have been.
“We don’t know anything about the cases clinically — we don’t know if they’ve got symptoms, we don’t know if people are unwell, we might be picking up lots of mild, asymptomatic cases,” he said.