(CNN)Students began flocking back to the six campuses of the University of Maine this fall hoping for a more normal college experience, one without shutdowns or Zoom classes.

As those tens of thousands of students returned to residence halls and full classrooms, university leaders hoped the measures they put in place would keep Covid-19 cases down and avoid widespread cases that shut down many campuses nationwide last spring.
University of Maine President Joan Ferrini-Mundy, who chairs the system’s Science Advisory Board, told CNN they prepared a science-based, multifaceted approach with the help of a team that included an epidemiologist, a statistician, microbiologists and virologists.
As the semester began at the end of August, university officials were about to find out if it would work.
In September, cases in the heavily vaccinated state began to rise. Hospitals began filling up with numbers not seen since a surge in January, according to the state’s Center for Disease Control & Prevention. The number of people needing ventilators reached all-time highs and intensive care units reached record numbers, according to state health data. All counties began to be classified as having high levels of transmission. 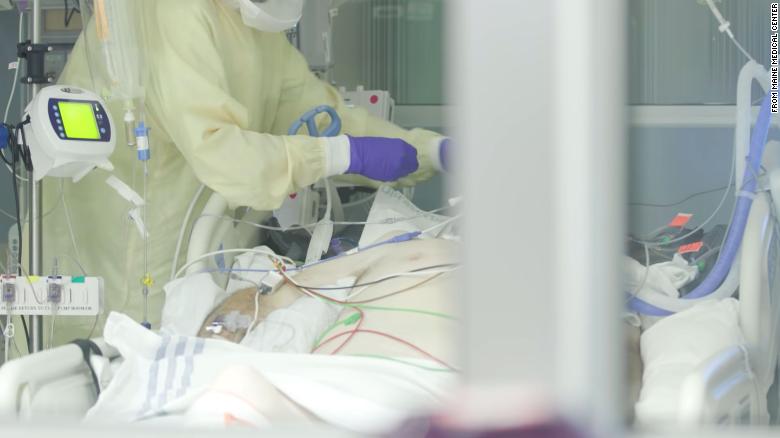 An inside view of ICU nurses caring for unvaccinated Covid-19 patients at the Maine Medical Center.
And yet, throughout the University of Maine, cases remained extremely low and seemingly avoided the crush taking hold of the state. At the start of October, the campus system of more than 30,000 students and employees had a 1.5% positivity rate, compared to the state’s rising 4.5% positivity rate.
The university told CNN that the system has had 52 known Covid-19 cases among students or employees as of Wednesday. Forty-five of those were on the flagship campus in Orono. Zero cases were recorded at the University of Maine at Augusta, University of Maine Farmington and University of Maine at Presque Isle campuses.
So how did they do it?
Ferrini-Mundy credits that multifront system — known as the “Swiss cheese” model — as a key defense against Covid-19. While each prevention measure, or layer of cheese has holes in it, when stacked together they create an effective defense.
Ferrini-Mundy knows a big part of it is not just the measures the campus put in place, but the willingness to adhere — a situation that doesn’t always exist in other settings. 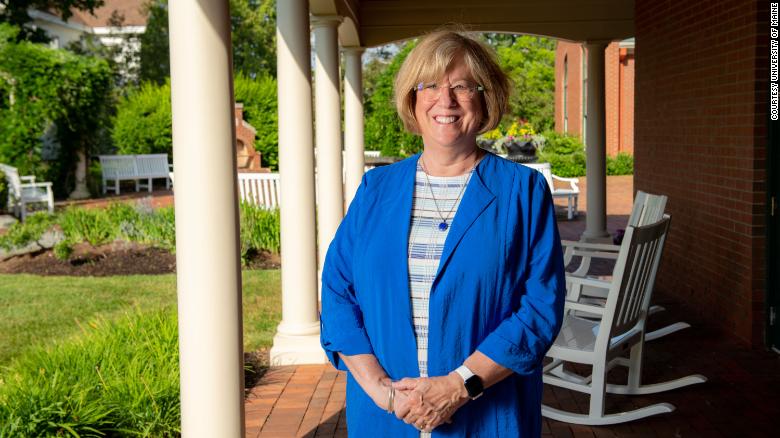 University of Maine President Joan Ferrini-Mundy also chairs the system’s Science Advisory Board, which helped inform mitigation measures.
“We’ve been able to control this through excellent behavior and compliance by our students,” Ferrini-Mundy said.
Lucia Mullen, a senior analyst at Johns Hopkins Center for Health Security, said the university’s success shows two things. First, that this “Swiss cheese” model is the strongest plan to increase activities and social interactions while making sure transmission is low.
“It also shows the difference like compliance and willingness can make in in bringing down cases,” Mullen said.
While there is always going to be exceptions and settings where the university model couldn’t work, Mullen says it’s a good example of success in a time of Covid-19 fatigue.

One of the big reasons for the university system success is the rate of vaccination on campus compared with the rest of the state. Maine has a strong full dose vaccination rate of 74.4%, compared to the university’s systemwide 88.3%.
But, state health officials have said in briefings, the Delta variant only needs a small window to create havoc. And that’s mainly what happened among the unvaccinated population, according to Maine CDC Director Dr. Nirav D. Shah. Some pockets, especially rural areas, don’t have vaccination rates on par with the state’s average. 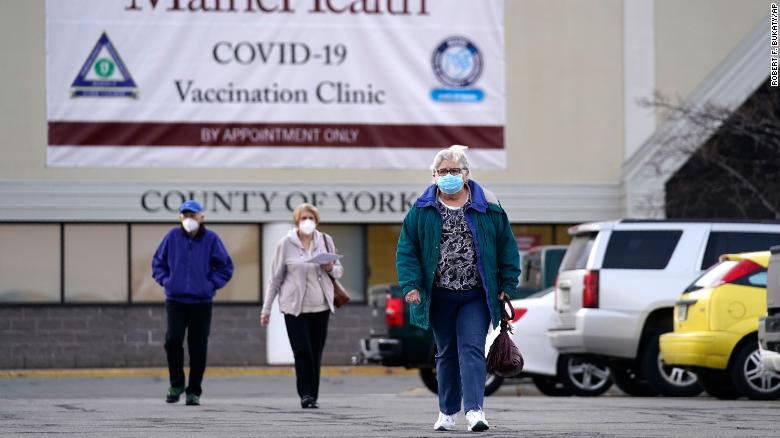 Senior citizens leave a vaccination site at a former department store in Sanford.
“Folks are getting it in their day-to-day lives,” Shah said in video message responding to the uptick in cases. “Maybe because they had coffee with a friend or had dinner with some friends at their house in smaller settings where the virus can travel easily from person to person. Right now, most of the new cases of Covid-19 that we are seeing are happening among unvaccinated people.”
On the University of Maine campuses, a vaccine mandate seems to have helped protect students against the community transmission seen in the rest of the state. More and more students got vaccinated early in the semester, giving the campus a measure of protection, the university said.
As of Tuesday, 97.2% of residential students were in compliance. Across the system, including faculty, staff, and students off-campus that rate is 88.3%, according to Ferrini-Mundy. The mandate will officially be enforced beginning October 15.

Any students not fully vaccinated or with an exemption must undergo weekly testing as part of what Ferrini-Mundy calls a “robust testing regime.” The university has a lab on campuses that processes those tests.
“We get quick turnaround results and then we’ve got a robust contact tracing program that that follows up,” she says.
And the University of Maine, like hundreds of other campuses, is turning to wastewater testing in hopes of early detection of cases. Researchers have said they have high hopes for this testing, which they say can alert public health officials to trends in infections and doesn’t depend on individuals getting tested. And because people excrete virus in feces before they show symptoms, it can serve as an early-warning system for outbreaks. 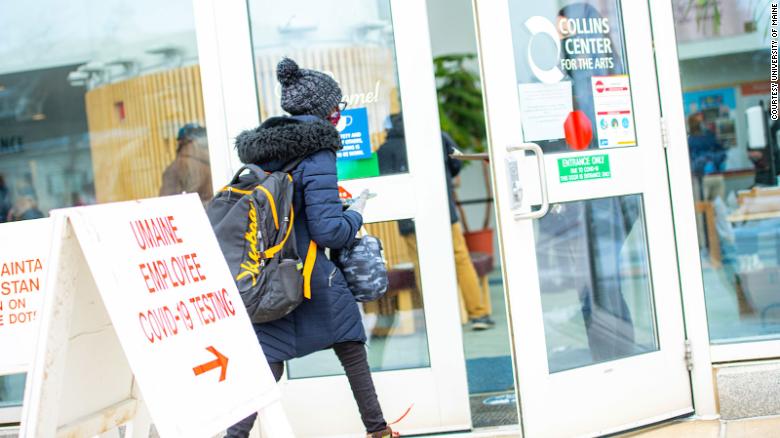 A University of Maine employee arrives for weekly asymptomatic testing at the Collins Center in February 2021.
“We really want to be sure that if there are asymptomatic cases, perhaps in vaccinated people who aren’t being tested on our campus, that we have a couple of backup systems in place,” Ferrini-Mundy said of the wastewater testing.
Mullen said such testing is an important component with testing unvaccinated students to help cut off the virus as soon as possible.
“We can identify (the virus) much sooner,” Mullen said. “So, we stopped the potential chain of transmission, because instead of not identifying it until they’ve had time to infect others we identify it at the source.”

On top of that, Ferrini-Mundy touts their indoor masking policy in all facilities, including classrooms.
Some state colleges with vaccine mandates are not requiring masking indoors, or only in residence halls. Some colleges have said their state’s board of regents have not allowed them to enact mask or vaccine mandates.
“It sounds like this university has such a high compliance with mask use indoors, that’s a major factor as well, because we’re just presenting less opportunities for the virus to take hold and for people to be exposed,” Mullen said.
Ferrini-Mundy credits the messaging throughout the system and faculty assistance in ensuring mask wearing is not only happening but happening the correct way.
“I just came away from a faculty meeting and some of the folks there were saying, ‘I need to remind them every now and then the mask needs to go above the nose, and they’re doing that, and the students comply,'” she said.
Ferrini-Mundy even noted that it isn’t rare to see students masking outdoors, where it is not mandated.

The university system is not resting on the current success, Ferrini-Mundy says, with some additional measures coming.
With concerns about sports, conferences and other events moving indoors when winter comes to Maine, there will be a requirement to show proof of vaccination or a negative test at a gathering with more than 250 people. Some campuses have already been doing that, but it will become a requirement next week, Ferrini-Mundy says.
And as the vaccine mandate takes place, the university is reaching out to the minority of people who have not either submitted proof or requested an exemption. Ferrini-Mundy says as of Tuesday, that was 708 people across the whole university system.
The university is making phone calls, sending text messages, e-mails, app reminders, holding one-on-one support sessions on Zoom and a Covid-19 hotline to try and get them all into compliance.
Then, the hammer will drop.
“They won’t be able to register for spring semester if they don’t do this and come October 31, we actually will be withdrawing them from their courses,” Ferrini-Mundy says.

Ferrini-Mundy cannot help but praise all partners, including students, for creating an atmosphere that seems to have insulated them from widespread cases for now.
Maine’s Center for Disease Control & Prevention heralded the university as an “excellent partner throughout Maine’s pandemic response.”
“Its leaders have consistently put public health ahead of politics and taken proactive steps to limit virus transmission on campuses and within the wider university system community,” the agency said in a statement.
Ferrini-Mundy believes the student buy-in due to the struggles of learning throughout the pandemic is a big reason for the university’s success.
“We had a disruptive year last year — our students weren’t able to be here fully. They were engaged in a variety of hybrid kinds of remote courses which we are very grateful that we were able to do,” she said.
“But the feeling I’m getting here as I talk to students out and around on the campus is they really want to be back. They want to make this work.”