(CNN)While the rollout of vaccines in the United States is “really impressive,” Dr. Anthony Fauci told CNN on Monday, Americans still need to do two things to blunt the pandemic.

First, they must continue getting their shots, he said. Second, they must avoid declaring victory prematurely and putting aside the methods that helped bring down cases before a recent rise.
“We see pulling back on so many of the public health measures, the mask mandates, the restaurant opening, the bars. We can’t be doing that. We’ve got to wait a bit longer,” he told CNN’s “The Situation Room with Wolf Blitzer.”
Fauci, the nation’s top infectious disease doctor and chief medical adviser to President Joe Biden, said that if the US keeps a pace of 3 to 4 million vaccination shots per day, “pretty soon we’re going to see a turnaround.”
When asked to give a baseball metaphor for where the US stands in the battle against Covid-19, Fauci said there is no apt comparison.
“It’s not like baseball, Wolf, because the inning that we’re in is going to depend on how we respond,” Fauci said. “If I say we’re in the seventh inning, it’s almost over, and we have surges like we’re seeing throughout Europe and the rest of the world and the threat of a surge that we’re seeing now … It’s not measured in innings anymore.
“It’s measured in what we do to contain this.”
Covid-19 cases and hospitalizations in the US are rising, predominantly among younger people who haven’t yet gotten a shot.

Some experts say the US could beat another potential surge in the coming weeks if Americans hold on a little longer and continue to practice safety measures while more of the population is vaccinated against the virus.
So far, about 36.4% of all Americans received at least one Covid-19 vaccine dose, according to CDC data. And 22.3% of the population is fully vaccinated.
Among US adults, nearly 46.5% have received at least one dose of vaccine and 28.6% are fully vaccinated, the CDC said. If vaccinations continue at the current pace, the US sometime this week will likely hit a milestone of half of adults having received at least one dose of vaccine.
At the pace that the US is administering vaccines, the country could reach the vaccination numbers needed to control the virus over the next few months, Dr. Jonathan Reiner, a professor of medicine and surgery at George Washington University, said.
“The way to do that is to vaccinate like crazy,” he said.
About 4.6 million doses were administered Saturday, the highest number of doses reported administered in one day. Over the past week, more than 3.1 million doses of vaccine have been administered each day on average, according to the CDC.
But there are challenges ahead.
“The last 20 to 30% are going to be the hardest because a lot of folks in this country are still hesitant to get the vaccine. We’re seeing it all over the country,” Reiner said. “We need to really get down on the grassroots level, talk to people about their hesitancy and get shots into arms.”
“Because if we don’t vaccinate that last 30% or so, we’re still going to have to live with this virus for a very long time.”

The Biden administration outlined new steps Monday to continue to increase vaccinations.
The administration announced a new federally supported mass vaccination center in Oregon, part of its continued efforts toward promoting vaccine equity. It also announced other steps toward getting more shots in arms.
“We’re excited to announce today a new federally-run mass vaccination site in Central Point, Oregon,” White House senior Covid-19 adviser Andy Slavitt said at a Covid briefing, noting that President Joe Biden had set a goal on March 29 of adding a dozen such sites by April 19.
“We are on track to meet the President’s goal this week, ahead of schedule. And by next week, we will have opened a total of 36 mass vaccination sites with a combined capability of administering 124,000 shots per day,” Slavitt said.

Michigan is in the middle of a violent surge, and one epidemiologist says other states should be paying close attention.
“Michigan is really the bellwether for what it looks like when the B.1.1.7 variant … spreads in the United States,” Dr. Celine Gounder told CNN on Sunday.
Gounder said the variant is causing a surge in cases and the state is seeing more people in their 30s, 40s and 50s getting sick and being hospitalized.
The B.1.1.7 variant, first spotted in the UK, is now the dominant strain of the virus in the US. Experts say it’s more contagious. And some studies suggest it may cause more severe disease and may potentially be more deadly. But two recent studies reported Monday didn’t find a link to more severe instances of Covid-19.
Florida has the highest number of cases of the variant, followed by Michigan, Minnesota and Massachusetts, according to data from the Centers for Disease Control and Prevention. 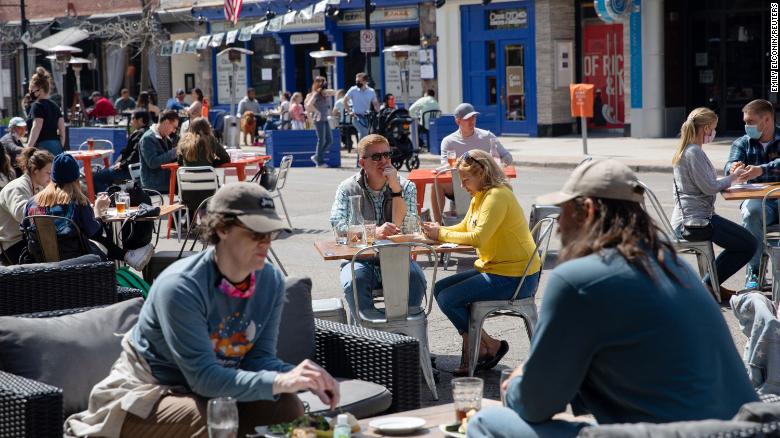 People dine outdoors at a restaurant in Ann Arbor, Michigan, on April 4.
Michigan’s surge is a combination of two factors, Gounder says: the spread of the B.1.1.7 variant combined with people relaxing on mitigation measures before enough residents are vaccinated.
And while some officials — including Gov. Gretchen Whitmer — are trying to make a case for the federal government to ramp up vaccines to the state, the CDC director said that won’t help in this case.
Here’s why: It takes about two weeks after the Pfizer and Moderna second doses or the Johnson & Johnson one-dose vaccine before people are immune.
“When you have an acute situation — extraordinary number of cases like we have in Michigan — the answer is not necessarily to give vaccine. In fact, we know that the vaccine will have a delayed response. The answer to that is to really close things down,” Dr. Rochelle Walensky said during a virtual White House briefing on Monday.
“I think if we tried to vaccinate our way out of what is happening in Michigan, we would be disappointed that it took so long for the vaccine to work, to actually have the impact.”
And Gounder told CNN, “The incubation period (for the virus), which is the time from when you are exposed to when you are infected with coronavirus, is four to five days.”
“So there is no way that a surge in vaccination is going to help curb this when transmission is happening right now,” she said. “The hard truth is that the only thing that will curb transmission right now are measures that take effect immediately.” For example, masking up, not dining indoors, and socializing outdoors, she added.
Michigan is reporting thousands of new Covid-19 cases daily, when just weeks ago, state data showed the daily reported case count was as low as 563 cases. In one part of the state, emergency room physician Dr. Rob Davidson told CNN hospitalizations have gone up “four fold in just the last two weeks.”
“Hospitals are being inundated,” Reiner told CNN. “Michigan needs to shut down.”
But he added the government should send more vaccines to the state.
“Think about it this way: Every year during fire season, when forest fires get out of control, we don’t just leave the states to manage as best they can. We surge firefighting forces into those states. So Michigan is on fire now. And we need to put that out,” he said.

But it’s not just Michigan.
Minnesota health officials warned the state was seeing a “sharp increase” in Covid-19 cases, saying it’s “more important than ever” to keep wearing a mask and physical distancing.
Ohio Gov. Mike DeWine said the state was seeing rising Covid-19 cases, hospitalizations and ICU admissions and urged residents to get vaccinated to avoid another surge.
“This is a race,” he said. “We are in a race. And it’s a life-and-death race.”

CNN’s Jacqueline Howard and Anna Sturla contributed to this report.