A dad who traveled 1,200 miles for Covid-19 care is finally going home. Here’s what he wants you to know

(CNN)These days, brushing his teeth while standing up is a major accomplishment.

But Robby Walker is alive — a feat some doctors didn’t expect two months ago. And while the 52-year-old struggles to speak long sentences, he’s now using his voice to try to prevent others from suffering the way he did.
The Florida father of six was unvaccinated and gravely ill as Covid-19 pneumonia ravaged both his lungs in August. “He is in dire need of an ECMO treatment, which is not available at the hospital that he is in,” his wife Susan Walker told CNN at the time.
ECMO treatment uses an external machine that can function as the body’s heart and lungs. It can be used for organ transplant patients, victims of severe heart attacks and seriously ill Covid-19 patients — including young adults.
Family members called 169 hospitals in several states, but there was no ECMO availability for Robby. “All the beds are taken up by Covid victims also getting ECMO treatment,” Susan said in a CNN interview.
Then a doctor in Connecticut saw Susan’s emotional interview and decided to help.
Now, after three weeks on ECMO and a month learning how to walk again, Robby returned to Florida this week — with a new mission.
Robby Walker was released from rehab Wednesday at Gaylord Specialty Healthcare in Connecticut.

A different life after Covid-19

Before Robby fell ill in July, he was a strong and sturdy construction business owner who worked out at the gym and ran 5 miles every day.
“Fifty-two years, I’ve done pretty much whatever I wanted,” Robby told CNN. “Now, I’m very limited.”
Scarred lungs and reduced lung capacity means he can only speak in short, choppy sentences before having to catch his breath. He also lost more than 50 pounds while hospitalized as his muscles eroded.
Even brushing his teeth is now a struggle.
“Sitting in a chair, it’s probably a 5- or 6-minute ordeal,” Robby said.
“If I stand, then I have to take a break between. So it’s a little longer,” he said.
“It takes a lot more energy to hold yourself up. I can go from sitting in a chair to standing, and my heart rate will jump 20, 30 beats a minute.”
After his ECMO treatment at Connecticut’s Saint Francis Hospital, Robby spent a month in physical therapy at Gaylord Speciality Healthcare about 30 miles away.
He relearned how to walk and practiced basic self-care with the help of an assistant. But he still needs a walker to move around, and small tasks can be draining — even after taking a break.
“Once your heart rate comes down and your breathing gets straight, you’re still just exhausted,” he said. “Physically. It just takes a lot of energy to do.”
But the fact he’s even alive is worth celebrating.

‘They told me he was dying’

Robby called his wife on July 25 from his hospital bed in Florida and told her he had made a gut-wrenching decision.
“He had signed the papers to be intubated,” Susan said.
Some Covid-19 patients who get put on ventilators don’t survive the disease. Their final calls to their families before intubation are their last.
“He cried and just told me how regretful he was of not getting the shot,” Susan said. “And he begged me to go get vaccinated.”
She did. But it was too late to protect her husband, whose condition kept deteriorating.
“They told me he was dying,” Susan said. And the ECMO treatment Robby needed wasn’t available.
Susan told her story to CNN in August. Hours later, a doctor 1,200 miles away was checking his Facebook feed and saw a CNN post with a video clip of Susan’s interview.
“I just clicked on it and watched it and … it was pretty compelling,” said Dr. Robert Gallagher, chief of cardiothoracic surgery at Trinity Health of New England.
Cardiothoracic surgeons operate on diseases in the chest, including in the heart and lungs. By the time Covid-19 patients reach Gallagher, they’re usually in dire condition — and often in need of ECMO.
He forwarded Susan’s interview to the chief perfusionist, who runs the ECMO machines. And she immediately wanted to help.
“I said, ‘OK, how are we going to find this family?'” Angela Sakal, the chief perfusionist at Saint Francis Hospital in Connecticut, told CNN.
She contacted a friend in Florida who’s savvy on social media. “And within a couple of hours, she had Susan’s phone number,” Sakal said. 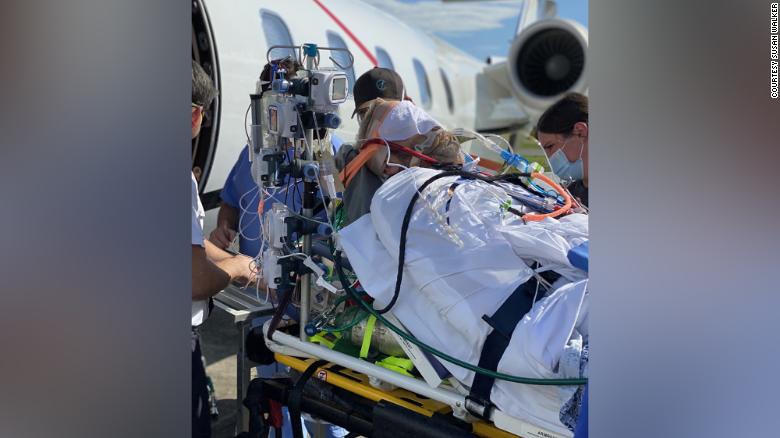 Susan Walker said she dug into retirement savings to help pay for Robby’s medical evacation flight.
Within two days, Susan hired a medical evacuation team to fly Robby from Florida to Connecticut — intubated, sedated and near death.
When Sakal first saw Robby, she wasn’t sure he would survive.
“I can’t guarantee you an outcome,” she recalled telling Susan. “I don’t know what the future is going to be. But I can promise you that we’re going to do the best that we can for him.”
ECMO is sometimes used as a last resort for critically ill Covid-19 patients with failing lungs. It removes blood from the body, eliminates carbon dioxide and adds oxygen to the blood, then pumps the blood back into the body so the lungs might have a chance to recover.
Robby Walker’s blood is removed and returned during ECMO treatment.
Gallagher inserted the ECMO tubes in Robby’s neck. And over the next 22 days, Sakal oversaw Robby’s ECMO treatment.

Robby isn’t the only previously healthy Covid-19 patient Sakal has seen needing ECMO.
With the rise of the Delta variant, Sakal said some ECMO patients have been in their 20s.
“What we’re finding is our Covid patients — even the young ones — are single organ failure (and) previously healthy,” Sakal said. “And the Covid is just destroying their lungs.”
Not everyone who goes on ECMO survives. But after three weeks of getting his blood extracted and returned, Robby’s lungs had recovered enough to support him again.
He was discharged from Saint Francis in mid-September and started a month of inpatient rehabilitation at Gaylord Specialty Healthcare. 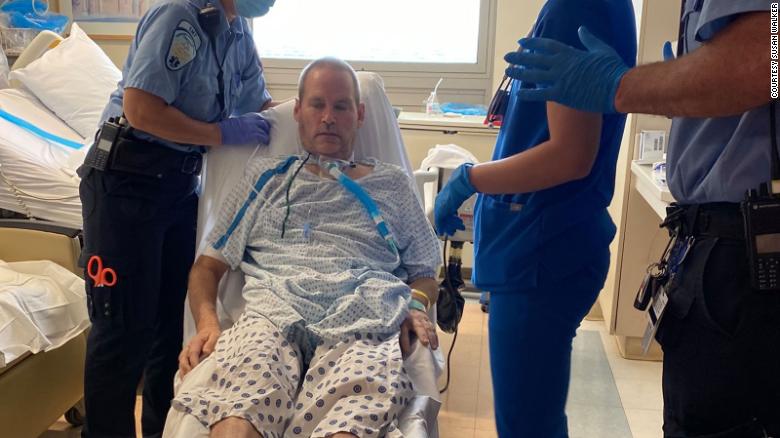 Robby Walker left Saint Francis hospital unable to stand without the help of a walker.
“My lungs have gotten a little bit better, (but) my heart rate still races a little bit,” Robby said this week.
“I can walk by myself — somebody’s there just kind of making sure I’m staying straight. But I use a roller/walker, and I’m able to walk a decent distance,” he said.
“I mean, I’m not going to the mall or going shopping. But I’m able to walk some now. So it’s been a big improvement.”
After a month of difficult work relearning basic skills, Robby was released from rehab Wednesday. Most of his ECMO team from Saint Francis Hospital traveled to Gaylord to see him off to Florida. 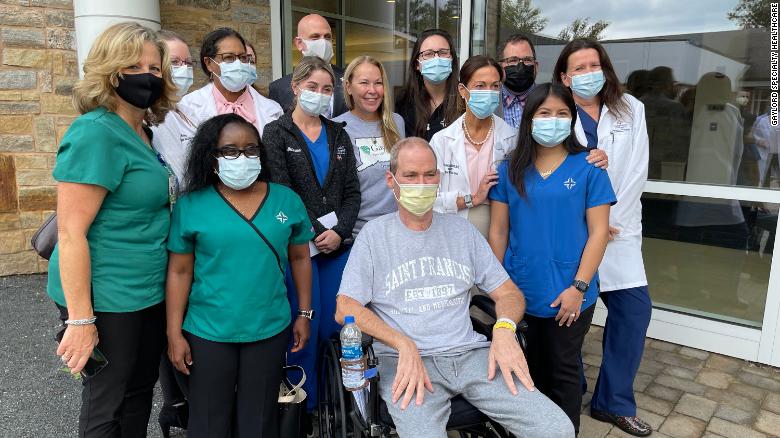 Robby Walker, his wife Susan (in gray shirt) and members of Saint Francis Hospital’s ECMO team gather Wednesday to celebrate Walker’s release from rehabilitation at Gaylord Specialty Healthcare. Angela Sakal (far right) was Walker’s chief perfusionist at Saint Francis.
Sakal was there. She fought back tears as she visited her former patient.
“I remember when he first got here,” she said Wednesday. “And I watched him today, standing up and talking and walking. It was amazing. It was just awesome.”

A new life filled with uncertainty and lessons learned

Robby’s two brothers rented an RV and drove up to Connecticut to bring him and Susan home. The drive would take more than 24 hours.
As he traveled back to Florida to restart his life, Robby said the first thing he wanted was his wife’s homemade chicken pot pie.
But many other aspects of his former life will be different.
It’s not clear when Robby might be able to go to work again, as he still needs months more of rehabilitation. 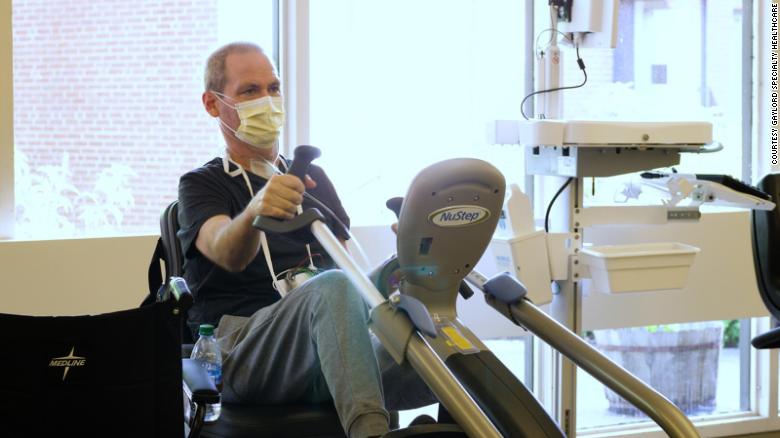 Robby Walker spent a month in rehab at Gaylord Specialty Healthcare in Connecticut. Scarred lungs and reduced lung capacity make even small tasks challenging, he said.
The family also has no idea how much of the $1.5 million in medical bills racked up so far in Florida and Connecticut they will owe — or how exactly they will pay it. A family friend set up a GoFundMe account to help with Robby’s medical expenses.
And Robby doesn’t know whether he’ll be able to return to all the activities he loved.
“My goal is to get hopefully 80% or 90% to where I was,” he said. But “they just don’t know enough about this to give any kind of definitive answers.”
For now, he won’t be able to go fishing or work out at the gym every day.
“I don’t have a lot of strength,” he said, joking about fishing: “I wouldn’t want anything to pull me over the reel.”
But what he lacks in physical ability, he’s gained in new wisdom — especially when it comes to Covid-19 and vaccines.
Robby’s ordeal has inspired more than 100 friends, relatives and acquaintances to get vaccinated — including some who were extremely hesitant, Susan said.
Robby said the reason he and Susan didn’t get vaccinated earlier was due to “a lack of education on our part.”
With countless rumors and claims spread on social media, “you don’t know what to believe anymore,” he said. “A lot of that was ignorance on our part, for not doing more research.”
“We thought that the vaccine was something that was created in a year or two. So we felt like there wasn’t enough information,” he said.
“But through this journey that I’ve had, we’ve discovered that (mRNA vaccine research) has actually been around for 20-plus years.”
He also wrongly assumed that he wouldn’t get severely sick.
“I just thought it would be like a flu. I thought that it was something that affected people with underlying conditions. I had none,” Robby said.
“But for whatever reason, it affected me differently. And if I had to do it over again, I would have gotten my vaccination when it was available to me.”
After he left the hospital, Robby received his first dose of the Moderna vaccine. He had some side effects for a day, he said, but they weren’t nearly as bad as his Covid-19 symptoms.
“There was a little fever … my first few days of Covid, I had a bigger fever than that,” Robby said.
“I just had no energy. I did run a fever for probably a day, day and a half. But nothing horrible compared to everything else I’ve gone through.”
Source: here