US states that saw some of the country’s worst Covid-19 case rates over the past week also reported the highest number of new vaccinations per capita, data published Thursday by the US Centers for Disease Control and Prevention shows.

Tennessee, which reported the country’s worst Covid-19 cases rate, had the sixth-best rate of new vaccinations per capita in the US over the past week. The state’s hospitals are “under increasing strain from the highly contagious Delta variant,” Tennessee’s health department wrote on Twitter Thursday, adding in a statement that the strain was continuing to fuel an increase in infections.
“Many hospitals are experiencing capacity constraints unlike we have seen during the pandemic,” the department said, urging residents to get their shots and adding that most cases and hospitalizations are among the unvaccinated.
Roughly 42.1% of residents are fully vaccinated.
Alabama, which had the second worst case rate, reported the highest number of new Covid-19 vaccinations per capita in the country in the past week.
“With the highly contagious Delta COVID-19 variant circulating, and cases, hospitalizations and deaths increasing, we continue urging all eligible people to be vaccinated as quickly as possible,” Alabama State Health Officer Dr. Scott Harris said in a statement on Thursday, as the state’s health department announced a new Covid-19 vaccine campaign.
On Thursday, the state reported a 22% positivity rate and categorized every single one of its counties at a “high” level of community transmission. More than 3,000 people were hospitalized with the virus across the state, according to data from the US Department of Health and Human Services.
Roughly 38.6% of Alabama residents are fully vaccinated.
Other states that are reporting some of the country’s worst case rates but high numbers of new vaccinations include Florida, Georgia, Kentucky, Mississippi, and South Carolina.
AdventHealth’s Central Florida Division reported a decline this week in Covid-19 patients in its hospitals — but said the number continues to be higher than earlier surges.
“We are optimistic in that we feel that number is going to continue to go down, but it’s important to understand our hospitals and ICUs continue to be at very tight capacity,” Dr. Victor Herrera, the chief medical officer at AdventHealth Orlando said in a briefing. “It’s going to be some time before we really feel that relief.”

Covid-19 hospitalizations remain high, but there are signs of improvement, HHS data show

Survey: More than 80% of Americans 16 and older have immunity

More than 80% of Americans 16 and older have some level of immunity against the coronavirus, mostly through vaccination, a survey of blood donations indicates.
The survey, led by the CDC, also indicates that about twice as many people have been infected with the virus as have been officially counted. More than 39 million Americans have been diagnosed with coronavirus infection since the pandemic started in 2020.
The team, led by the CDC’s Dr. Jefferson Jones, set out to determine how close the US might be to some kind of herd immunity — although they do not claim to have any kind of handle on that yet.
They worked with 17 blood collection organizations working in all 50 states plus Washington, DC, and Puerto Rico to test blood covering 74% of the population. In the end, they tested about 1.4 million samples.
In July 2020, before any vaccine was available, 3.5% of samples carried antibodies to SARS-CoV-2, the virus that causes Covid-19. That rose to 11.5% by December, they reported in the medical journal JAMA. By May, 83.3% of samples had antibodies to the virus, most of them from vaccination.
And while in July 2020, blood surveillance indicated the US was only counting one infection out of every three true infections, that fell to one in two a year later.
This was all pre-Delta, the researchers caution. Plus, they didn’t measure the other part of the human response — one involving cells known as T-cells — and one that might induce broader immunity. But knowing who has antibodies can help inform public health efforts.
“Several large studies have shown that among individuals who are seropositive from prior SARS-CoV-2 infection, COVID-19 incidence is reduced by 80% to 95%, similar to vaccine efficacy estimates,” they noted.
“The study will continue until at least December 2021, and results will be made available on the CDC’s website,” they wrote.

More than 500,000 children tested positive for Covid-19 in the US from August 5 to August 26, according to state data collected by the American Academy of Pediatrics. At least 203,962 of those cases were reported in the week of August 19 to August 26; In late June, one weekly reported number was just shy of 8,500.
With concerns building over safely allowing children to return to in-person learning at schools, health experts agree that mask mandates are an effective tool in stemming infections.
“The virus is raging in all these children who are unvaccinated, which is why in schools mask mandates are so important,” CNN medical analyst Dr. Jonathan Reiner told Jake Tapper last week, pointing out that inoculation rates are also low among adolescents who are eligible. “They have no other protection. They’re literally sitting ducks.”
More states and school districts across the country are imposing mask and vaccine mandates, while others are working to limit Covid-19 exposure among the unvaccinated. New York Gov. Kathy Hochul announced on Tuesday plans to implement mandatory weekly Covid-19 testing for state school staff who are not vaccinated.
“We all need to remain vigilant to protect each other – and that means coming in to get your shot and booster shot, wearing masks in indoor spaces, and exercising basic safety measures that we are all familiar with by now,” Hochul said.
For teens ages 12 and up attending classes, it remains imperative for them to receive vaccinations to help curb the spread of Covid-19, officials say. And vaccine mandates, while unpopular to some, may be a necessary step.
“I believe that mandating vaccines for children to appear in school is a good idea,” Dr. Anthony Fauci, director of the National Institute of Allergy and Infectious Diseases, told CNN this week, noting that this would not be a radical idea to impose.
“This is not something new. We have mandates in many places in schools, particularly public schools, that if in fact you want a child to come in — we’ve done this for decades and decades requiring (vaccines for) polio, measles, mumps, rubella, hepatitis,” Fauci said. “So this would not be something new, requiring vaccinations for children to come to school.” 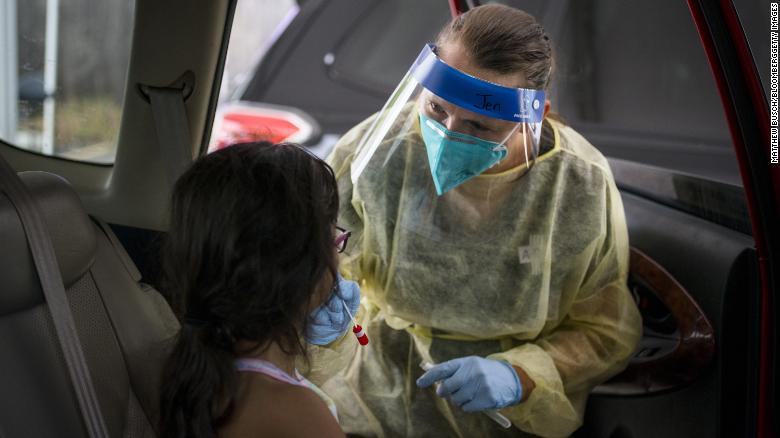 A healthcare worker administers a Covid-19 test to a child at the Austin Regional Clinic drive-thru vaccination and testing site in Austin, Texas, on Thursday, Aug. 5, 2021.

Cognizant of the anxiousness felt by some parents and guardians sending their children back to school unvaccinated, health officials say they are working expediently to review whether the age of vaccine eligibility can be lowered.
If authorized, the CDC would move quickly to recommend the use of Covid-19 vaccines in younger children, agency director Dr. Rochelle Walensky said.
“Everybody is looking at this with urgency. Everyone recognizes how important it is for those children to have access to vaccines,” Walensky said during a National Parent Teacher Association town hall Wednesday.
The US Food and Drug Administration (FDA) must approve or authorize the vaccines in younger children first, Walensky noted. And the vaccine makers must make the case to the FDA with clinical trial data.
“My understanding of the timeline is pretty consistent with what is being said — the middle of fall is my understanding, early fall is when we will anticipate seeing the data — and then it will lie with the hands of the FDA. And I’m hopeful for the end of the year,” she said.
Pfizer/BioNTech’s vaccine has been fully approved by the FDA for Americans 16 and older, and emergency use authorization has been granted for those 12 and up. The Moderna and Johnson & Johnson vaccines are under emergency use authorization only for adults 18 and older.
Moderna announced last week that it had completed its submission to the FDA for full approval, and has also filed with the FDA for an emergency use authorization for its vaccine in people age 12 and older.
Clinical trials of vaccines for children under the age of 12 are ongoing.
Fauci said Wednesday that the FDA should have the data to consider authorizing a Covid-19 vaccine for children under 12 by the end of September.
“We should have enough of the data to examine and make a decision as we get into late September, the beginning of October,” Fauci said. “Then the data will be presented to the FDA, and the FDA will make a determination whether they will grant that under an emergency use authorization or some other mechanism.”
When asked whether a Covid-19 vaccine will be authorized for young children before Thanksgiving, Fauci said he hopes so, but does not want to get ahead of the FDA.
Correction: An earlier version of this story overstated the percentage of Americans who have some immunity to coronavirus. More than 80% of Americans 16 and older have some immunity.