These 5 figures show how bad the US Covid-19 surge is. But experts say we can turn things around

(CNN)As the rate of Covid-19 vaccinations climbed and new infection numbers plummeted in spring, many Americans thought they were in for a carefree summer.

But lagging vaccinations and a highly contagious new variant dragged the US back into a vicious Covid-19 surge — one that’s prompted new mask mandates and measures and still shows no signs of slowing down.
The rise in cases is being driven by unvaccinated Americans — who health officials say also make up most of hospitalized Covid-19 patients and deaths across the country. Fueling the surge is the dangerous Delta variant, a strain so contagious that those who were not previously infected or have not been vaccinated will likely get it, said Scott Gottlieb, the head of the Food and Drug Administration in the Trump administration.
If America doesn’t vaccinate a large enough number of its population to help crush this outbreak, the surge could become the country’s worst yet, some experts warn.
“This surge that we’re going through right now has every potential to be — and already looks to be — the worst surge we’ve faced so far,” former US Surgeon General Dr. Jerome Adams said in a live online interview with The Washington Post on Tuesday.
But we don’t have to get there. Health officials say the key to quickly turning things around is getting more shots into arms.
“If we work together, unify as a country, vaccinate everyone who is interested and unvaccinated, and put our masks on to prevent disease, we could really control this in a matter of weeks,” US Centers for Disease Control and Prevention Director Dr. Rochelle Walensky told CNN on Thursday.
If that doesn’t happen, Walensky warned, the US could soon be seeing the same levels of daily cases it did back in January — several hundred thousand daily.
Here’s where we are now.

As of Friday, America’s seven-day average of daily Covid-19 cases was more than 107,100 — the highest average in nearly six months, according to Johns Hopkins University data.
The last time average daily cases topped 100,000 was February 11. Average daily cases have seen a nine-fold increase since early July.
Most of the cases are coming from areas with low vaccination rates, White House Covid-19 response coordinator Jeff Zients said in a Covid-19 briefing on Monday. A third of all US cases in the previous week came from Florida and Texas, he said.
“The frustrating part is this is all preventable,” Dr. Peter Hotez, dean of the National School of Tropical Medicine at Baylor College of Medicine, told CNN’s Pamela Brown on Thursday. “Had we really accelerated throughout May and June and fully vaccinated the country … we wouldn’t have to worry about this so much.”
Surges have been particularly steep across the South, including in Florida and Louisiana, where Walensky said Thursday there have been “exponential rises” in cases that don’t look like they’ve reached their peak just yet. 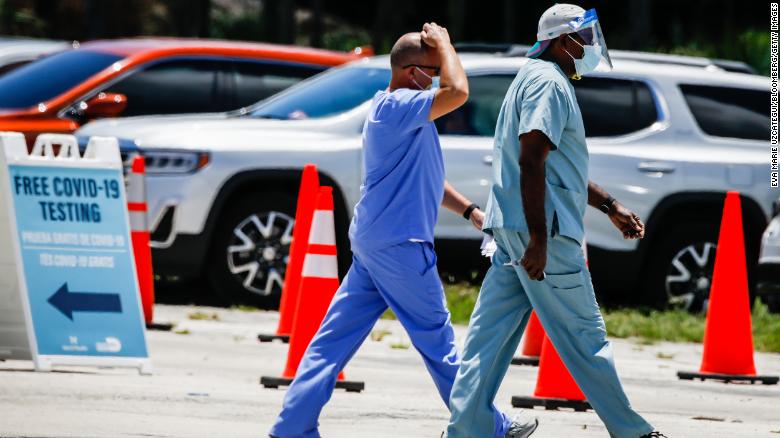 Hospitalizations are highest since February

More than 66,000 Americans were hospitalized with Covid-19 across the country as of late Saturday, according to data from the US Department of Health and Human Services.
America’s Covid-19 hospitalizations haven’t been this high since February.
“Today we find ourselves retracing our steps towards the edge of a cliff. It is very conceivable that we could once again be heading toward a public health catastrophe,” Harris County, Texas, Judge Lina Hidalgo said in a news conference on Thursday. In that conference, Houston Mayor Sylvester Turner announced the Texas Medical Center campus in Houston had admitted more than 300 Covid-19 patients in a day.
Florida, which leads the nation in the number of adults and children hospitalized for Covid-19, had 12,373 adults and 143 children hospitalized Thursday, according to CDC data.
Data published Friday by the Florida Department of Health showed the state reported a record 134,506 new Covid-19 cases over the past week, for an average of 19,215 cases each day. The previous record high was on January 8, with 125,937 total cases reported over seven days, for an average of 17,991 cases each day, according to data from Johns Hopkins.
Louisiana officials reported Friday a record 2,421 people hospitalized with Covid-19 statewide — beating the state’s previous record that was set just a day earlier. Of the state’s hospitalized patients roughly 91% are unvaccinated, officials said earlier in the week.
Last week, Arkansas reported a record low of 25 ICU beds available across the state. In Mississippi, health officials said Wednesday only six ICU beds were available. 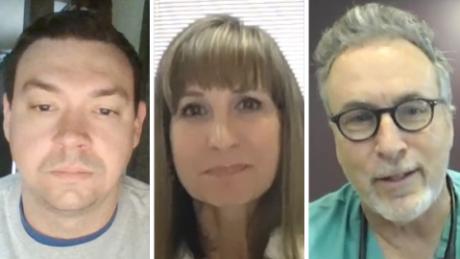 Child and teen Covid-19 cases jumped 84% in a week

Nearly 72,000 new child Covid-19 cases were reported in the week between July 22 and July 29, the American Academy of Pediatrics reported on Tuesday — a substantial increase from the previous week, when about 39,000 cases were reported, and nearly five times what was being reported at the end of June. The definition of a child varies by state but generally includes those up to ages 17 or 18.
“I don’t think this virus is necessarily targeting kids or adolescents, I think what’s happened is, I think what you’re seeing across the South right now is a forest fire, and everything is getting swept up in it, including adolescents, including younger kids,” Hotez told CNN on Thursday.
“The way you stop that is you get as many people vaccinated,” he added. “The more you can vaccinate, you can actually slow transmission.”
The alarming rise comes as schools across the country prepare to welcome students back to class, while navigating the safest way forward. With children under 12 years old still ineligible for a shot, some states are requiring students to mask up — while others have banned school mask mandates.
Leaders across the country are taking different steps to help protect America’s youngest. Utah Gov. Spencer Cox said the state will give away KN-95 masks to children and Arkansas Gov. Asa Hutchinson called a special session of the Arkansas Legislature to amend a law passed to “end mandatory face covering requirements.” He said he regretted signing the bill, adding that local school districts should have the flexibility to add protection for children under 12, who cannot be vaccinated.
On Friday, an Arkansas judge temporarily blocked the enforcement of that law.

Delta variant accounts for 93% of US Covid-19 cases

Behind the country’s latest surge is the Delta variant, which now accounts for more than 93% of coronavirus circulating in the US, according to data from the CDC. This includes several sub-lineages of Delta, all of which are classified as variants of concern. The number is even higher in parts of the country including Iowa, Kansas, Missouri and Nebraska, where Delta accounts for more than 98% of circulating virus.
Those numbers show a rapid increase in the variant’s prevalence across the US. In late May, the CDC estimated that Delta made up about 3% of new Covid-19 cases.
An internal document from the CDC last month said the variant appears to cause more severe illness and is about as transmissible as chickenpox.
“This is serious,” Walensky previously told CNN. “It’s one of the most transmissible viruses we know about.”
Officials across the country have said the Delta variant is fueling their case increases.
Mississippi Health Officer Dr. Thomas Dobbs said Thursday the state has seen a “phenomenal increase” in daily cases that’s “entirely attributable to the Delta variant, which is sweeping over Mississippi like a tsunami.” Roughly 97% of new cases are among unvaccinated people, Dobbs said.
“We’re seeing the unvaccinated in our population driving the current surge. We’re seeing about 89% of our hospitalizations and 85% of our deaths are unvaccinated.” 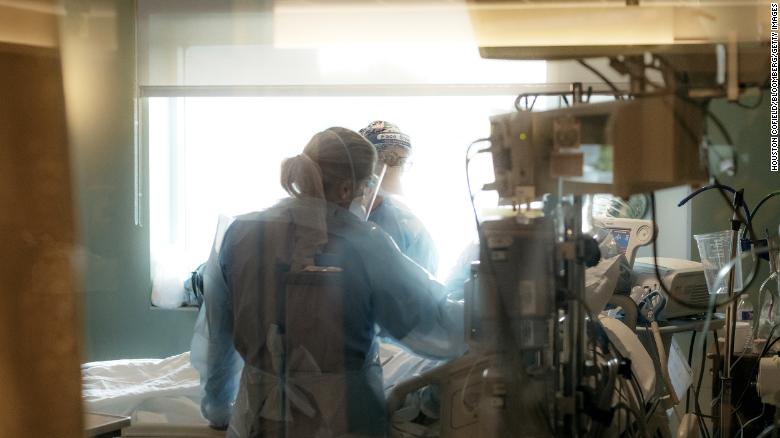 Nurses check on a patient in the ICU Covid-19 ward at NEA Baptist Memorial Hospital in Jonesboro, Arkansas, on Wednesday, August 4.

Most Americans live in substantial or high Covid-19 spread areas

More than 97% of Americans live in areas with “substantial” or “high” Covid-19 transmission, according to CDC data.
The agency said late last month that even fully vaccinated people who live in those areas should wear masks indoors, to prevent further spread of the Delta variant. CDC guidance for unvaccinated people remains that they should continue masking up until they are fully vaccinated.
The “substantial” and “high” terms are part of the CDC’s system that measures the level of community transmission in a county based on two metrics: new Covid-19 cases per 100,000 people and the positivity rate.
Experts say knowing how much virus is circulating in a community can help residents understand the kind of risk they’re taking when choosing whether to mask up or not.

The figures are grim, but there’s good news: Covid-19 vaccinations are picking up pace, with an average of more than 464,700 people initiating their vaccinations every day as of Thursday, CDC data shows. That’s the highest average daily pace in nearly seven weeks — and a 19% increase over last week’s pace.
And seeing some of the sharpest vaccination increases are several Southern states, which have for months seen poor vaccine progress and heavy vaccine hesitancy. At the end of July, Alabama’s average of new doses administered was more than double what it was three weeks before.
Louisiana saw daily vaccination rates jump 111% in the same time frame, while in Missouri daily average vaccinations climbed by 87%.
Roughly 58.5% of the US population has received at least one Covid-19 vaccine dose and roughly 50.1% is fully vaccinated, CDC data shows.
“The ultimate answer” to turning around this surge is vaccination, emergency medicine physician Dr. Leana Wen told CNN’s Anderson Cooper.
“We know that what will stop the virus in its tracks and really is our only and best way out of the pandemic is to increase our vaccination rates,” Wen said. “If we have a high enough level of immunity in the US then we’re able to stop this virus from wreaking the type of havoc that it is.”