“We ask you God, that you heal our town, Father, from this disease,” Zapata said in the livestream.
Inside the house, looking out through the glass front door, was her friend Carla Balderas, who was quarantined due to Covid-19, along with her 9-year-old son Reinaldo. Missing was Carla’s husband Sammy. He was in the local hospital, fighting coronavirus.
As Zapata panned the camera to show her surroundings, more than a dozen cars could be seen parked in front of the house, their occupants following the livestream from inside their vehicles, to be Covid safe.
Zapata reflected on that moment in an interview with CNN, describing it as a cry for mercy given the great pain and suffering in her small, west Texas oilfield town of Iraan — population about 1,200. 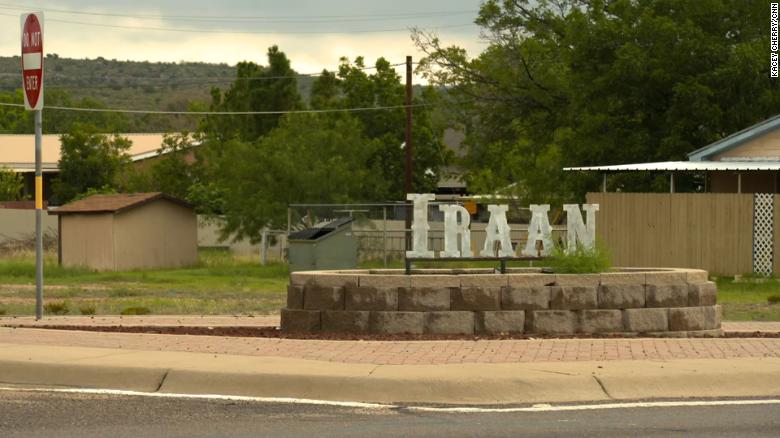 Iraan is pronounced “Ira-Ann,” as it was named after Ira and Ann Yates, ranchers who owned the property beneath which a nearby oil field was discovered.
“We had had Covid before but never to this magnitude,” she said.
Click button to enter email to sign up for CNN’s Meanwhile in America newsletter.
close dialog
It seemed that just about everyone in Iraan knew someone who was fighting Covid-19. During a two-week span this month, 119 people were tested for the virus and 50 tested positive, according to Iraan General Hospital CEO Jason Rybolt. That’s a 42% positivity rate.
“[I’m] very concerned for the community,” Rybolt said. “Very concerned for trying to make sure that they have the healthcare that they need.”
While the town is small, it could be seen as a microcosm of what might take place statewide as the number of Covid-19 cases and hospitalizations remain high and as Gov. Greg Abbott continues to fight against mask mandates. 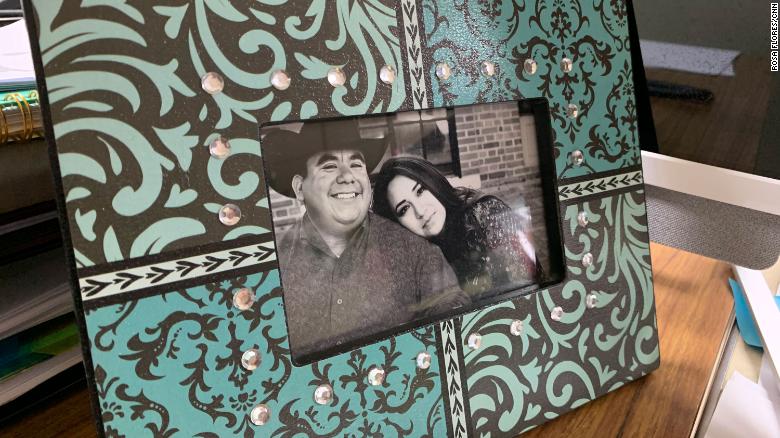 A framed photo of Carla and Sammy Balderas sits on Carla’s desk at the city building. Carla has been in quarantine with her young son, while her husband was hospitalized with Covid-19. Sammy Balderas passed away on August 19.

‘Fight for your life’

Zapata says she doesn’t know how the outbreak in her town started. But she says that Sammy tested positive for coronavirus before his wife Carla did. Carla lost her senses of taste and smell. Sammy had trouble breathing.
“Every time he moved, he started to cough,” Zapata said.
A few days after testing positive for Covid-19, Zapata said, Sammy was admitted to the Iraan General Hospital, a 14-bed rural facility. His condition deteriorated quickly, Zapata said, and the hospital didn’t have the intensive care he required. That’s when Zapata started praying for an ICU bed to free up — anywhere — for her friend Sammy.
“That was hard,” Zapata said with a broken voice. “Three times that I can remember that Carla messaged me and said they think they have a bed. And I would say, ‘I’m praying.'” 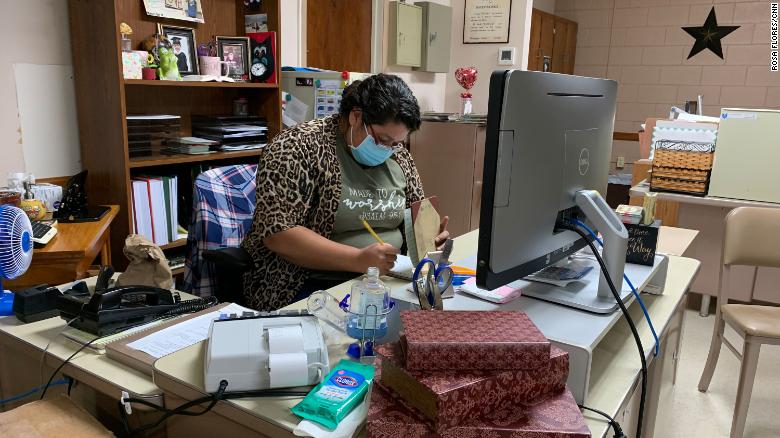 Vicky Zapata, who works for the city, has helped lead prayer vigils for Covid-19 victims and organize food deliveries for those in quarantine. Her close friends, Carla and Sammy Balderas, both got infected with Covid-19 in August.
For a few weeks now, the number of ICU beds available across the entire state has been low. Currently, there are 372 ICU beds available, according to the latest state data. The nearest medical centers to Iraan that offer ICU care are in Midland-Odessa and San Angelo, Texas — each about 100 miles away.
“It could be 12 hours. It could be 36 hours, you just never know how long it’s going to take,” Rybolt said of the time necessary for a bed to open up.
Sammy entered the hospital on a Thursday, Zapata said, and was airlifted to a hospital in San Angelo that Saturday. Sammy’s family live streamed images of him being rolled out of the hospital on a stretcher and loaded onto a helicopter.
“Fight for your life,” someone could be heard shouting in the livestream. “We love you, Sammy.”
At least one Iraan resident has been airlifted out-of-state for care because of the lack of available ICU beds in Texas, Rybolt said.
Mary Jo Jernigan was flown to New Mexico. Her husband Mike got Covid-19, too, and he drove himself to San Angelo, according to the couple’s daughter. 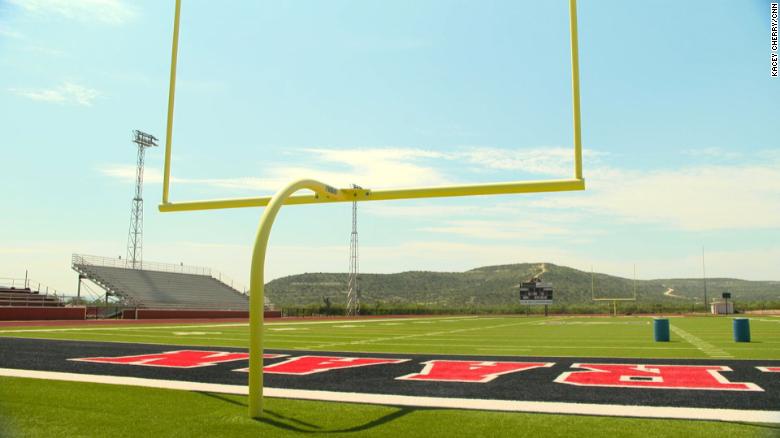 Iraan is a small town with big pride, especially when it comes to football. The season’s first football game has been postponed due to the recent Covid-19 outbreak.

The school shut down, so did the city building

Last week, the school district shut down after only five days of classes because about a quarter of the staff and 16% of the students got infected or were exposed to Covid-19, according to Iraan-Sheffield Independent School District Superintendent Tracy Canter.
“In the last week, we’ve seen more Covid cases for staff and students than we did the entire year, last year, during school,” Canter said.
For right now the closure is due to last until August 30, depending on the situation. In the meantime, there’s no virtual or remote learning, the superintendent told parents in a letter. She also asked everyone to pitch in to slow the spread of the virus.
“Please ensure that students are truly taking this opportunity to quarantine. This means that students and staff will quarantine only with immediate family. They should not be out and about in the community or hanging out with friends. The only way that this will work is if everyone does their part,” Canter wrote.
The beloved football season is postponed, homecoming hangs in the balance, and city council members decided to close the city building to residents.
“To me, this is very serious,” said Darren Brown, Iraan’s mayor.
Brown says that vaccination rates for the town are not available.
The city council voted to postpone late fees on water and gas utilities and stop utility disconnections for at least a month. Residents will be allowed to make payment arrangements if they can’t pay their utility bills. 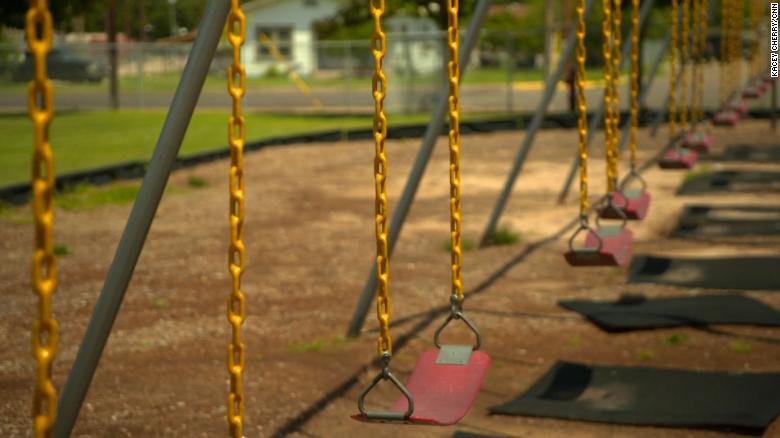 The Iraan-Sheffield ISD shut down for two weeks due to a Covid -19 outbreak. After the first week of school, about a quarter of the teachers and 16% of students tested positive or were in quarantine. The district, with about 335 students, is set to reopen August 30.

‘Sammy is with Jesus’

With so many people in quarantine, the small town of Iraan is quieter than normal. There is no morning and afternoon rush to drop off and pick up students at school. And on a Friday night, the football stadium was eerily quiet.
To make things worse, the town is beginning to mourn.
Sammy died last Thursday.
He passed away five days after an ICU bed became available for him and just hours after CNN’s interview with Zapata.
Zapata went back to Facebook to thank everyone who had joined her in prayer just a week before.
“Thank you to everyone who prayed… Sammy is with Jesus,” Zapata’s post read.
Sammy’s funeral is scheduled for Wednesday at the town’s football stadium, according to his obituary — which also says Sammy’s “infectious smile, laugh and the love he had for his family” will be cherished by those he left behind.
As for what lesson the rest of the country could learn from this little Texas town? Zapata says it’s very simple.
“Love your neighbor … today it could be me, tomorrow it could be you.”