(CNN)The US is making headway in its battle against Covid-19 — with infection and hospitalization rates on the decline after a surge fueled by the highly transmissible Delta variant.

But, Centers for Disease Control and Prevention Director Dr. Rochelle Walensky said Thursday, human behavior will ultimately determine how and when the pandemic ends.
“We have a lot of the science right now. We have vaccines, and what we can’t really predict is human behavior. Human behavior in this pandemic hasn’t served us very well,” she said.
There are still pockets of unvaccinated people in the US who are not protected. “The virus isn’t stupid. It’s going to go there,” Walensky added.
The CDC director said the pandemic has been divisive, and the nation’s ability to end it depends on the ability for people to take collective action.
“We are battling with one another and not battling with the common foe, which is the virus itself,” she said. 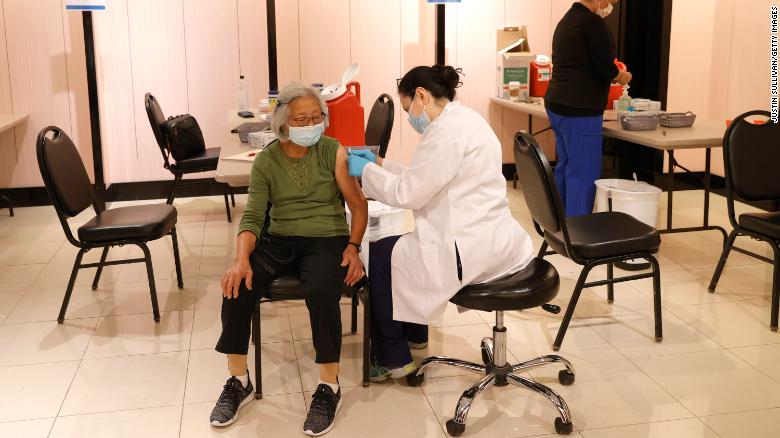 A Safeway pharmacist on prepares to give a Pfizer Covid-19 booster shot in San Rafael, California, on October 1.

Booster shots have outpaced the US rate of new vaccinations

The number of Americans getting booster shots are surpassing those who are initiating vaccination, and experts warn more is needed to continue the progress. The country has averaged more than 101,200 new cases a day over the last week — down 41% from a peak in a Delta-driven wave reached in mid-September, according to Johns Hopkins University data.
The number of Covid-19 patients in US hospitals — 68,760 as of Thursday — is down 34% from a Delta-wave peak reached in September, according to the Department of Health and Human Services.
Just over 56% of the total US population is fully vaccinated, according to the Centers for Disease Control and Prevention.
“This wave is receding, but unless we get the nearly 70 million unvaccinated Americans vaccinated, we are at risk for future waves,” Dr. Tom Frieden, former head of the CDC, told CNN on Wednesday.
An average of 384,963 booster vaccine doses are being given daily, while roughly 281,303 people are getting their first dose every day and about 292,927 people are becoming fully vaccinated each day, according to Wednesday’s CDC data.
In New Mexico, more people are getting vaccinated, but it’s not happening quickly enough to bring down Covid-19 cases, according to Dr. David Scrase, the acting health director at the state’s health department.
“Our Delta curve went up pretty steeply, and it’s not coming down,” Scrase said. “In fact, it’s plateaued.”
Scrase explained he’s concerned health care workers are getting exhausted.
“In the northwest (region of New Mexico) … the hospitals are really, really, really overwhelmed,” Scrase said. “I’ve just talked to too many people that say as soon as this curve comes down, they’re stepping back from their whole health care career. They just can’t do it anymore.”
And with winter fast approaching, experts are reinforcing the importance of getting vaccinated against both Covid-19 and the flu because they pose a double threat to an already strained health care system.

San Francisco is planning to relax its mask mandates next week. Mask requirements for many indoor gatherings of less than 100 people will be lifted, including at offices and gyms, for those fully vaccinated. And people will no longer be required to mask up at smaller college and religious gatherings as long as they meet the requirement.
“I’m excited that we’re once again at a place where we can begin easing the mask requirements,” Mayor London Breed said in a written statement. Breed added that it’s the direct result of the fact that the city has one of the highest vaccination rates in the country.
“Our cases have fallen, and our residents have done their part to keep themselves and those around them safe,” Breed wrote.
The city said when gathering unmasked, indoor venues must be properly ventilated. The Department of Public Health said the easing of masking rules could be suspended if hospitalization rates start to go up again.

Meanwhile, Pfizer and BioNTech said Thursday they are seeking US Food and Drug Administration emergency use authorization for their Covid-19 vaccine for children ages 5 to 11.
If authorized, this would be the first Covid-19 vaccine for younger children.
White House Covid-19 response coordinator Jeff Zients called the news a “really important next step” and an “important development” during an interview on CNN’s New Day.
An FDA vaccine advisory panel is scheduled to discuss Pfizer’s request on October 26. If the FDA authorizes it, a panel of CDC vaccine advisers will meet to consider whether to recommend its use.
Data from the Kaiser Family Foundation‘s Vaccine Monitor in September shows that 34 percent of parents say they would vaccinate their child as a soon as a vaccine for that age group becomes available. Some 32 percent want to wait and see how it goes and 24 percent say they will not vaccinate their children at all.
Nearly half of parents of 12- to 17-year-olds said their child has received at least one dose of the Covid-19 vaccine, according to KKF data in September.
Meanwhile, case numbers for a rare Covid-19 complication in children are seeing a 12% increase, according to the CDC. There have been 5,217 reported cases of multisystem inflammatory syndrome in children (MIS-C) through October 4. At least 46 children have died from the illness, a more than 12% increase in deaths from the month before and one of the largest increases this year.

Researchers: Covid-19 killed parents or grandparents of 140,000 US children, and minorities were hit harder

More than 140,000 US children have lost a parent or grandparent who took care of them to Covid-19, researchers at the CDC and elsewhere reported Thursday. That’s about 1 in 500 US children, the researchers said.
And children from racial and ethnic minorities were far more likely to lose such a caregiver, the CDC-led team found.
National Center for Health Statistics data through June showed that children of racial and ethnic minorities accounted for 65% of those who lost a primary caregiver, while White children accounted for 35%. That’s even though minorities account for just 39% of the US population.
“During 15 months of the Covid-19 pandemic, 120,630 children in the US experienced death of a primary caregiver, including parents and grandparents providing basic needs, because of Covid-19-associated death. Additionally, 22,007 children experienced death of secondary caregivers, for a total of 142,637 children losing primary or secondary caregivers,” the researchers wrote in the journal Pediatrics.
Worst hit were kids in Southern border states. Hispanic children in these states accounted for anywhere between 50% and 67% of affected children.
In Southeastern states, up to 57% of affected children are Black, and in states with tribal territories, American Indian/Alaska Native children accounted for up to 55% of kids who lost a parent or other primary caregiver to Covid-19, according to the researchers.
“Beyond parents, grandparents are increasingly indispensable, often providing basic needs. In the US from 2011 to 2019, 10% of children lived with a grandparent and in 2019, 4.5 million children lived with a grandparent providing their housing. Black, Hispanic, and Asian children are twice as likely as White children to live with a grandparent,” they wrote.
“Loss of parents is associated with mental health problems, shorter schooling, lower self-esteem, sexual risk behaviors, and risks of suicide, violence, sexual abuse, and exploitation,” they added. “Yet, there is hope. Safe and effective vaccines can stop Covid-19-associated orphanhood and death of caregivers from negatively impacting children and families.”