How worried should you be about the Delta variant?

The Covid news is contradictory. The country is more open every day and getting back to normal. People who want a vaccine should already have it. Sports stadiums are packed. Airlines are full. Restaurants are booked.

But as the US passes 600,000 confirmed Covid deaths, there are also warnings about the rise of a new Covid strain, the Delta variant, taking over in the US. It’s hard to understand how worried to be.
I went over to the CNN Health team, which has been writing about this nonstop, and here’s what I came away with. All of what’s below comes from their reporting. 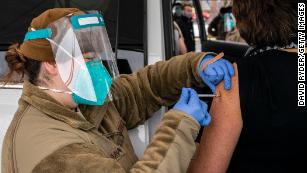 CNN analysis: Where vaccination is up, Covid-19 cases are down
What is the “Delta variant”? Officially the B.1.617.2 variant, it was first detected in India in February and has now spread across the globe. Some fear it could overwhelm health care systems and reverse reopening plans before vaccinations take hold.
It’s likely behind a deadly Covid wave this spring in India.
Why is it called the Delta variant? It’s kind of like naming storms. Variants all have scientific names — B.1.617.2, for instance. But those numbers and letters don’t roll off the tongue, so they were for some time also known by their countries of origin. The UK and South Africa variants, for instance. The Delta variant would have been the India variant.
In an effort to destigmatize countries associated with variants, the World Health Organization in May changed its designations to the Greek alphabet. The UK variant became the Alpha variant. In addition to four variants of concern, there are six variants of interest to the WHO and they have all been given Greek letters.
How does the Delta variant compare with other variants? It is more contagious, perhaps 60% more contagious than the Alpha variant, which was responsible for a surge in Michigan this spring.
MORE ON COVID VARIANT
How worried is the US government? The Centers for Disease Control and Prevention has labeled the Delta variant a “variant of concern,” which means scientists think it is more transmissible or may cause a more serious version of the disease. The WHO made a similar determination in May, as the Delta variant was tearing through India.
How prevalent is the Delta variant in the US? It accounted for 9.9% of US cases as of June 5, according to the CDC. By Sunday it accounted for 10.3% of cases, according to the website outbreak.info, which tracks variants. The Delta variant could be the dominant strain in the US within a month.
Do vaccines work against the Delta variant? Yes, but there is a catch. People who are fully vaccinated seem to have good protection against it. But people who have gotten only one shot of a two-dose vaccine do not.
How many Americans are vaccinated? Nearly 45% of Americans are fully vaccinated. It is looking increasingly unlikely that the US will meet President Joe Biden’s goal of vaccinating 70% of eligible Americans by July Fourth.
What used to be a divide has turned into a chasm between states with high rates of vaccination (Vermont is at more than 63% fully vaccinated) and those with low rates of vaccination (Mississippi is less than 30%).
There’s wild variation within states. Bay Area counties in California are near or exceed 60% vaccination. Many Central Valley counties are well below 40%.
Miami-Dade County in Florida is at 50% fully vaccinated. Many Panhandle counties in the northern part of the state are at less than 30%.
See where your state and county land.
We are living a vaccination experiment. Vaccines stop the spread. This report Wednesday from CNN’s Health team is both the most obvious thing in the world and also worth doing to combat vaccine ambivalence:
A CNN analysis found that states that have fully vaccinated more than half of their residents tend to have lower-than-average case rates that are trending down, while states that have vaccinated less than half of their residents had higher average case rates. …
Among states that have fully vaccinated more than half of their residents, the average case rate was about 24% lower, at about 20 cases per 100,000 people. But among states that have vaccinated less than 35% of their residents, the average was about 41 new cases per 100,000 people — about 1.6 times higher than the US rate and more than double the average rate among states that have fully vaccinated more than half of their residents.
Exceptions to the rule. Not every state follows this trend. Washington state has fully vaccinated more than half of its adult population, but still has one of the highest US case rates over the past week. Tennessee has one of the lowest case rates despite just about a third of residents being fully vaccinated.
One coming issue is the vaccination of children under 12.TheFood and Drug Administration’s vaccine advisers debated the pros and cons last week. There is concern about a very few reports of myocarditis — a heart inflammation — in less than 1 in a million vaccinated young people. People 12 and over should still get vaccinated.
But because of those reports, and the sensitive nature of vaccinating children, there is disagreement among FDA advisers over how fast to grant emergency use authorization for Covid vaccine in those under 12.
CORRECTION: An earlier version of this story mischaracterized the debate among FDA advisers over Covid vaccine emergency use authorization for kids under 12.