Hong Kong (CNN)Health workers in hazmat suits are not typically among the cast of characters featured at Shanghai Disneyland’s Halloween party.

That was until this year, when a single confirmed case sent the park, and its adjacent shopping district, Disneytown, into a snap lockdown Sunday evening.
The extreme measure saw tens of thousands of visitors and staff forced to undergo coronavirus testing before they were allowed to leave the park, as police blocked the exits and secured the grounds.
In a video that’s since gone viral on Chinese social media, crowds are shown lining up in front of makeshift testing sites, as health workers in full personal protective equipment (PPE) watch on. In the background colorful fireworks light up the night sky above a storybook castle.
The surreal juxtaposition of an impromptu mass testing drive and a Disney fireworks show is the latest example of how China’s stringent zero-Covid policy has permeated every corner of Chinese citizens’ lives.
As countries around the world gradually open up and learn to live with the coronavirus, China remains bent on completely eradicating Covid-19 from inside its borders, deploying massive efforts and resources to stamp out even a single case.
In its public statement, Shanghai Disney did not offer detailed reasons for the shutdown, only saying it was to “cooperate with the pandemic investigation in other provinces and cities.”
But a local health commission in the neighboring province of Jiangsu said a woman who visited Shanghai Disney on Saturday tested positive for Covid-19.
The woman had taken a train to Shanghai from Jiangxi province on Friday. During her return trip the next day, she was found to be a close contact of a confirmed case in Jiangxi and taken off the train for quarantine. She tested positive on Sunday and had a fever, and was diagnosed as a confirmed case, according to the municipal government of Hangzhou, where the woman alighted.
As of Monday morning, 33,863 people who were at Shanghai Disneyland and Disneytown over the weekend had been tested, and all results came back negative, according to the Shanghai government. But state media said about 100,000 people had visited the park at the weekend, citing sources.
Both Disneyland and Disneytown will remain closed on Monday and Tuesday “in order to follow the requirement of Covid-19 prevention and control,” the resort said in the statement. The subway station connected to Disney has also been closed until further notice.
While the park’s shutdown over a single case would likely be considered extreme by most people outside of China, many Chinese internet users have praised the Shanghai government and Disney for what they see as a lenient, targeted and effective response. 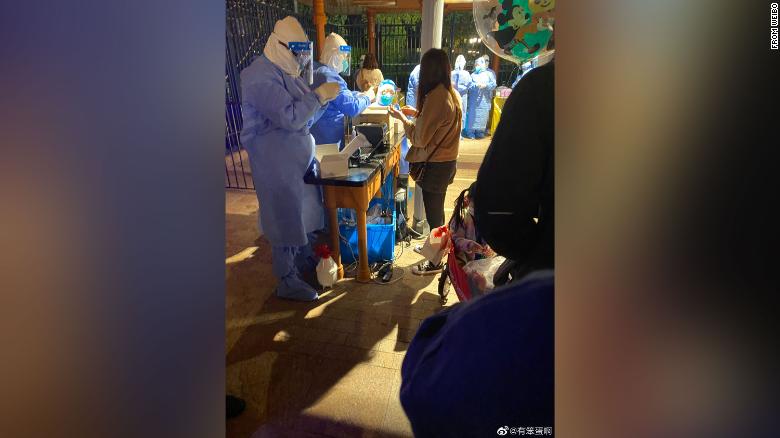 Shanghai Disneyland visitors queue for Covid-19 testing after the park announced a snap lockdown on Sunday.
The tests were well organized and conducted swiftly, and visitors were allowed to return home or to their hotels, instead of being taken into centralized quarantine. They are required to self-isolate and undergo another Covid test 24 hours after leaving the park. If that test is also negative, visitors will be asked to observe 12 days of health-monitoring and take more tests — but they won’t be confined to their homes or hotel rooms.
The requirements are actually quite mild when compared to some of the more stringent measures taken by other local authorities, as they rush to contain a rapidly spreading Covid-19 outbreak across China.
Over the past two weeks, the country has recorded more than 300 confirmed cases in 14 provinces and regions, with health officials warning on Saturday the situation was “severe and complicated.”
STAY INFORMED ON COVID-19
Last week, two high-speed trains heading to Beijing were stopped midway through their journeys, when two crew members were found to be close contacts of confirmed cases. Hundreds of passengers on board were taken away for centralized quarantine.
In Jiangxi province, a county turned all traffic lights to red to discourage traffic after a single case was reported on Saturday. Drivers who run the red light will be punished according to traffic rules, the county’s traffic police said in a statement Saturday. The mandate was withdrawn on Sunday after sparking an outcry online.
In Inner Mongolia’s Ejin Banner, nearly 10,000 tourists were trapped after the city imposed a lockdown over dozens of cases last month. Authorities started sending them to their home cities last week, but more than 300 tourists remained in Ejin Banner as of Sunday, according to state media.
And in Beijing, some residents complained on social media they were unable to return to the Chinese capital after making a trip out of town. 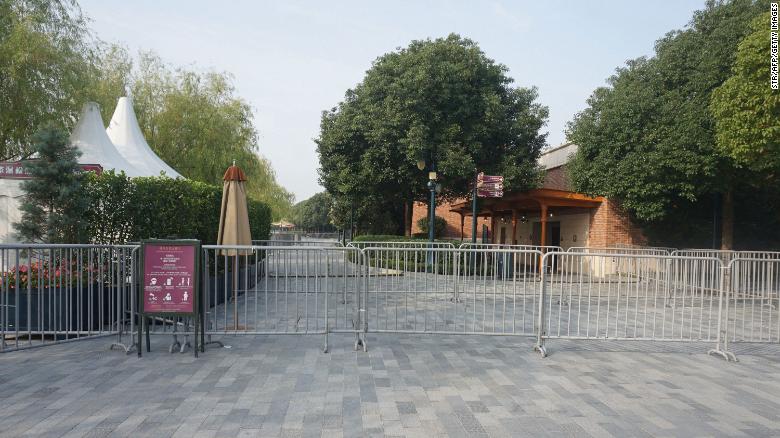 A closed Disney Resort is seen in Shanghai on Monday.
Beijing tightened entry restrictions for domestic travelers last month, canceling flights from cities with known infections. Last week, it also banned entry for people who had visited localities with infections within the past 14 days — even if they are Beijing residents who want to return home.
But on Weibo, China’s Twitter-like platform, some said they were prevented from buying train or flight tickets to Beijing even though they hadn’t visited places with infections or areas designated medium- or high-risk.
The Chinese capital has always been a top priority in the country’s zero-Covid policy, and now, it’s on even higher alert as a series of politically significant events are scheduled for the coming months.
Next week, members of the ruling Communist Party’s elite Central Committee are due to gather in the capital for their annual meeting, which paves the way for President Xi Jinping to stay for a third term in power at the party congress next fall. Come February, Beijing will host the 2022 Winter Olympics, becoming the first city to host both the Summer and Winter Games.
As increasingly stringent restrictions upend lives in Beijing and across China, Shanghai is fast becoming the envy of the nation for being the last stronghold for more reasonable and relatively lenient Covid measures. But how long that will last remains to be seen.