In the U.S., the percentage of cases caused by this new coronavirus variant jumped seven times in just a week, from 0.4% of the total cases sequenced to 2.9%, the Centers for Disease Control and Prevention estimates. And it’s already causing about 13% of cases in a region that includes New York and New Jersey.

In a household, the risk of spreading the omicron variant to another member is three times higher than it is with the delta variant, U.K. health officials estimated Friday. And delta, as you may know, is considered highly transmissible.

Why is omicron such a superspreading variant?

Preliminary data, published online Wednesday, gives us the first look at how omicron may behave inside the respiratory tract — and the data offers a tantalizing clue as to why this heavily mutated variant is spreading so fast and even outcompeting delta. 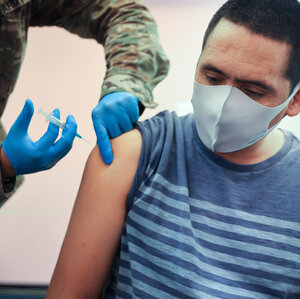 The omicron variant multiplies about 70 times faster inside human respiratory tract tissue than the delta variant does, scientists at the University of Hong Kong report. The variant also reaches higher levels in the tissue, compared with delta, 48 hours after infection.

“That’s amazing,” says immunologist Wilfredo Garcia-Beltran, who’s a fellow at the Ragon Institute of Massachusetts General Hospital and wasn’t involved in the study. This finding indicates that mutations in omicron have sped up the process of entering or replicating (or both) inside the tissue.

But how this finding, from tissue studied in the lab, relates to viral loads inside an actual person’s respiratory tract is still unknown, he emphasizes.

These findings from the University of Hong Kong haven’t been peer reviewed — and the experiments occurred entirely inside cell tissue. Nonetheless, the research supports another study, published online Tuesday, from Garcia-Beltran and his colleagues that also suggests omicron is more infectious than delta.

Using “fake” or pseudoviruses, they found that omicron’s spike protein — the region that binds to human cells, triggering infection — was much better at helping the virus enter human cells than the spike protein of delta or that of the original coronavirus.

The data suggests omicron may be able to infect people at a lower dose than delta or the original variant, Garcia-Beltran says. “That’s a very far-out interpretation,” he cautions. “But we think it will probably pan out that way, given that we’re looking at a variant with more efficient entry into human cells.”

In the Hong Kong study, virologist Michael Chan Chi-wai and his colleagues took tissue from human bronchi — the two large tubes in your respiratory tract that bring air to your lungs. The researchers infected the tissue with live, replicating particles of SARS-CoV-2 virus. They used three versions of the virus: delta, omicron and a variant that was circulating in 2020.

Then the researchers looked to see how fast each variant spread through the respiratory tissue. Within 24 hours, omicron had infected the tissue at 70 times the level observed with the delta variant.

Chan and his colleagues also ran the experiments with lung tissue. Interestingly, inside that tissue, omicron was less efficient at infecting cells than delta or the original version of the virus.

“The infection is more focused on the bronchia than the lungs and very fast,” wrote Marc Veldhoen on Twitter. He’s an immunologist at the University of Lisbon.

This focus on the respiratory tract, instead of the lungs, may suggest that omicron could cause less severe disease compared with delta or the original version of the virus. But many scientists, including Veldhoen, say it’s too soon to draw that conclusion.

“More infectious than delta is not good, particularly if you do not have immunity!” Veldhoen adds. “Without fast immunity, the virus can quickly disseminate from the bronchia to the lungs and other organs and do some serious damage!”

Furthermore, respiratory tissue is a far cry from actual living bronchi inside a person, says Alejandro Balazs, who’s a virologist at Harvard Medical School. The Hong Kong study “looks interesting for sure. But you have to always be careful how you interpret studies outside of animals and human patients.”

For starters, he says, the isolated tissue doesn’t generate much immune response to fight the virus. And in the study, the researchers monitored the virus’s infection only over a 48-hour period. “This experiment is happening in a very short period of time in a dish,” he says. “We don’t know for sure that omicron infects this bronchial tissue better than lung tissue. Or what happens 72 hours later.”

Scientists need to measure the viral loads inside people’s respiratory tracts, adds Garcia-Beltran. With delta, people have, on average, 1,000 times more virus particles in their respiratory tracts than with the original variants.

“I want to see what the viral loads look like for omicron,” he says. “Samples from people who are actually infected — that’s the gold standard. That’s where the action is.”